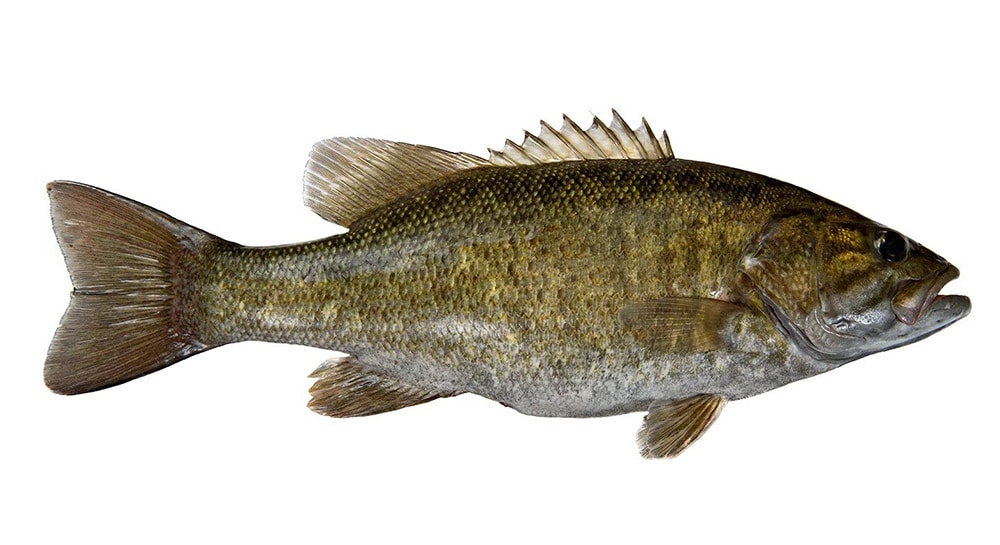 Smallmouth bass usually come in between 1-3 pounds but can reach up to 10 pounds or more. If you manage to land a beast in the 6-7 pound region, you’ve caught yourself a trophy and need to get a photo next to that monster! Most smallmouth bass reach 12-16 inches in length (30-40 cm).

Smallmouth bass fish have brown bodies with thick, dark stripes which begin from behind the gill plate and run to just before the base of the tail fin. Smallmouth bass tend to have 7-11 stripes. Often, smallmouth bass present with distinctive bright red eyes.

The shape of the bass’s body will differ depending on the sex of the given fish. Females will take on an oval shape, similar to an American football, while males will have a more elongated shape, typical of most black bass species. They are toothless and so are safe to handle by the lips.

Their pectoral fins start from just behind the gill plate, and the dorsal fins begin in the front-middle portion of its back. 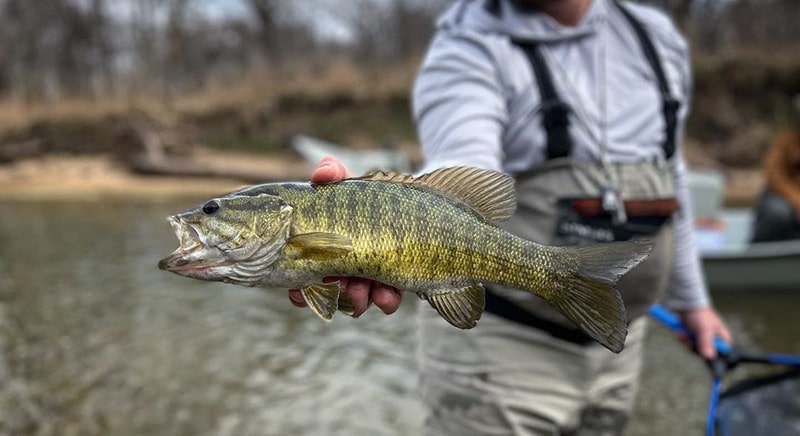 A stunning bronzeback in the hands of an angler

A Note on Spawning

Smallmouth breed during the spring period as water temperatures reach 50 to 60 degrees Fahrenheit. The females migrate to shallow water to make a bed, usually out of small rocks and mud. After laying, the smaller males will then move in to fertilize the eggs. At this point, the female is usually present, and the male will often have to fight her away. The eggs hatch in 4 to 6 days and stay around the nest for 2 to 3 weeks before heading out to deeper water.

How to Catch Smallmouth Bass

When considering bait for bass fish, you need to select something that mimics the fish’s natural diet, and to do so, there are live and artificial options. Smallmouth bass are carnivorous animals, so crawfish and live shad are very effective for live bait fishing.

Artificial lures, jigs, crankbaits, spinnerbaits, swimbaits, and soft plastic worms that are either crawfish patterned or bright and vibrant in color are also very effective. Topwater lures are also very useful during the spring and fall of the year. 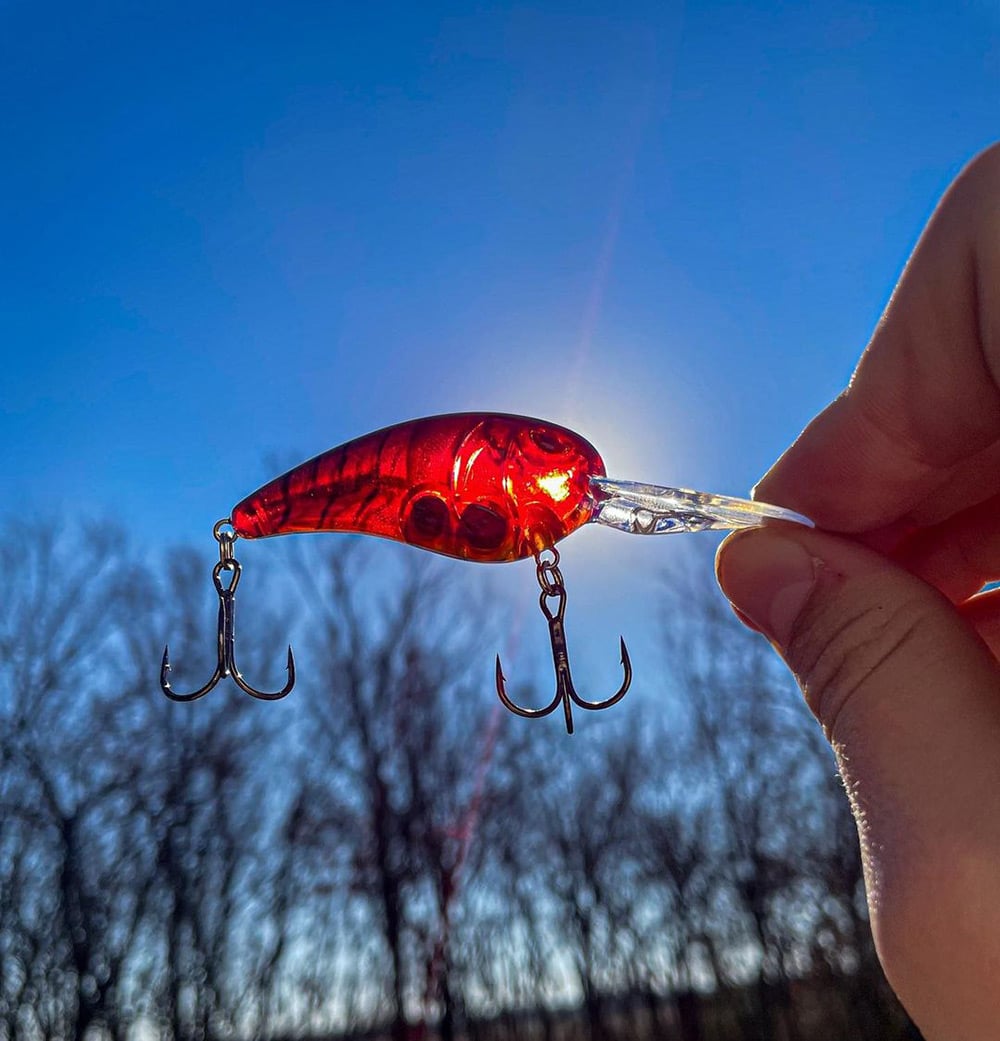 A crankbait for smallmouth bass fishing

In most parts of the United States, smallmouth bass are caught year-round, even through winter, when ice fishing comes into its own. However, mid-spring and late fall are when they are most active.

For the most part, smallmouth bass are evenly distributed throughout the entirety of North America, excluding the arctic and subarctic regions of the continent. You will find them slightly more densely populated in the central northern portion of North America but will most likely find larger smallmouth bass in the southeastern part of the United States.

Smallmouth bass love rocky points and brush piles that they can use for cover to ambush their prey. During the spring, smallmouth often hide around grass or lily pads in very shallow water at the shoreline. Conversely, during the heat of the summer and the cold of winter, smallmouth head for deep ledges and river channels to catch the bait fish funneling through. 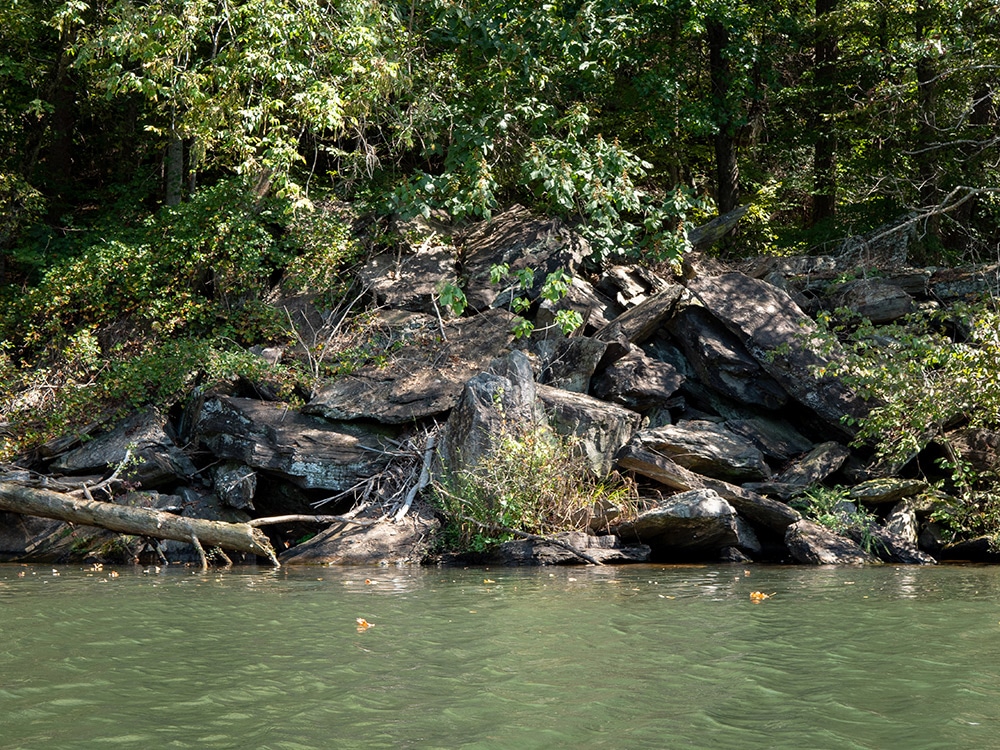 An ideal spot for smallmouth bass

Boat fishing for smallmouth is highly effective since you will cover more water and find different angles to fish various ledges and rock piles from. You will also find areas that are not fished as often and will have lower pressure from other anglers.

Topwater lures such as a hollow bodied frog or any other topwater frog lures are your best bet when fishing heavy cover, such as lily pads or grass. Other topwater lures such as a natural color Pop-R or Spook are highly productive when fishing open water. A fun and exciting way to catch smallmouth bass is to use frog lures and learn to master the art of ‘walking the dog’. 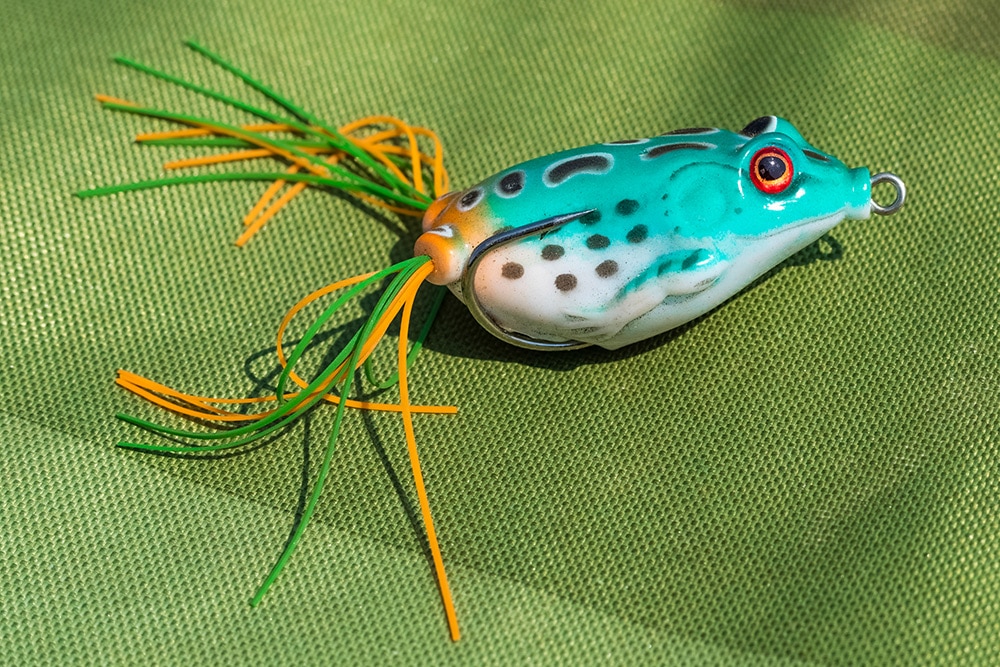 Swimming lures such as crankbaits and swimbaits are very useful when smallmouth feed aggressively around rock piles and ledges. A heavy swimbait or a deep-diving crankbait is a sure-fire lure to toss during the heat of the summer when the bass have moved out to deeper water. The newly produced glide bait can be used during the winter, presenting a larger but more natural look in cold water.

Spinnerbaits and chatter baits are always a fan favorite for smallmouth anglers. Though highly effective in daylight or nighttime hours, fishermen targeting smallmouth at night will undoubtedly reach for a brightly colored spinnerbait. These lures often produce aggressive reaction bites from ambushing smallmouth bass when presented close to the lake’s bottom. 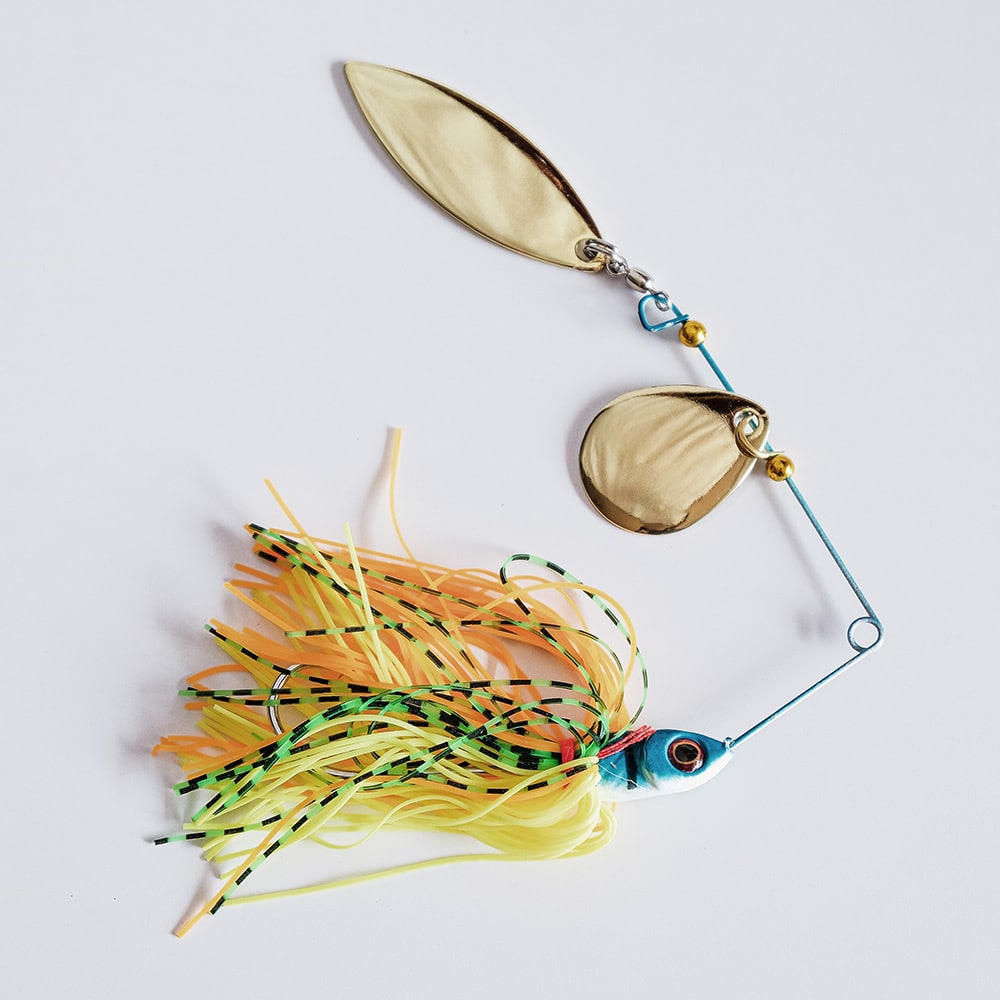 A spinnerbait – suitable for day or night bass fishing

The two most popular live baits for smallmouth are live crawfish or live shad. Paired with a ½ weight to get the bait into the strike zone, this is the most effective method of catching fall and wintertime smallmouth. Since you cannot get more realistic than an actual live bait, a smaller hook with a clear line will ensure strikes on the need of your line. 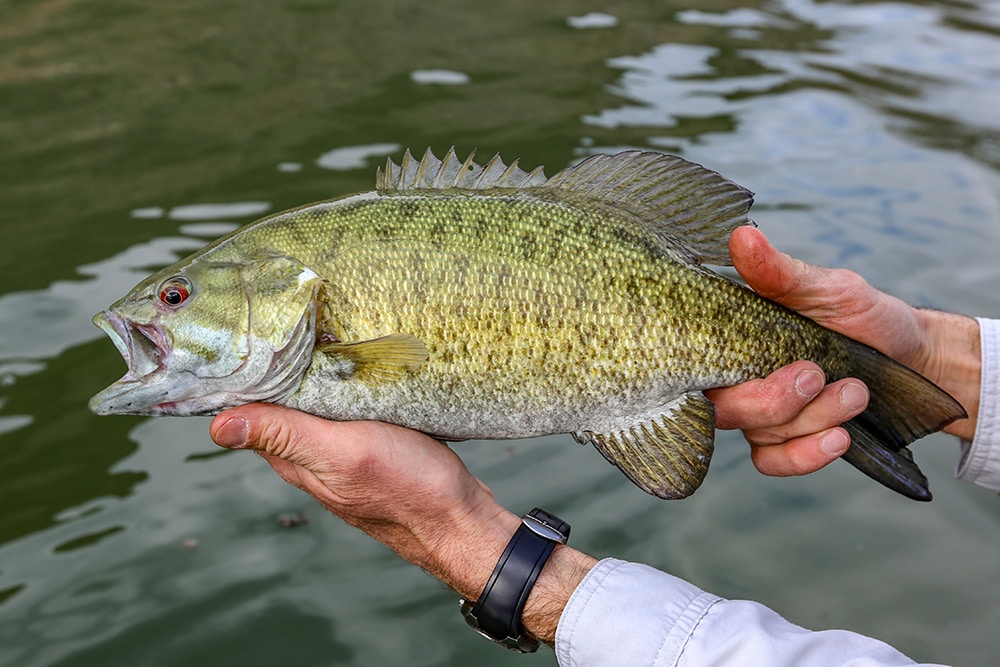 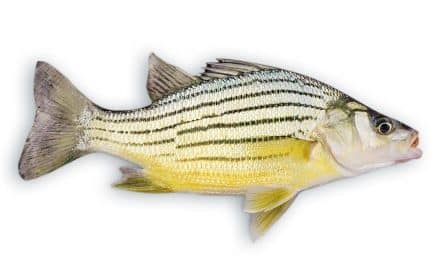 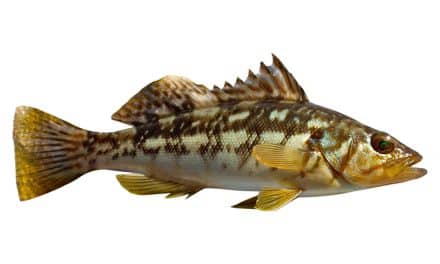 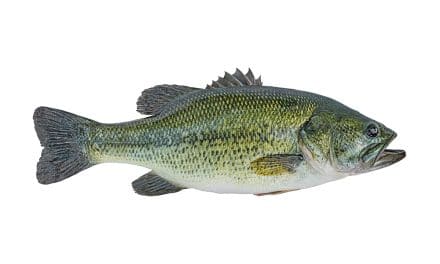 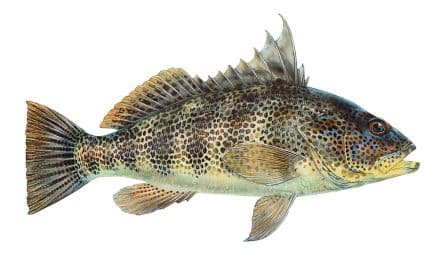