A Guide to Fishing Hook Sizes and Types 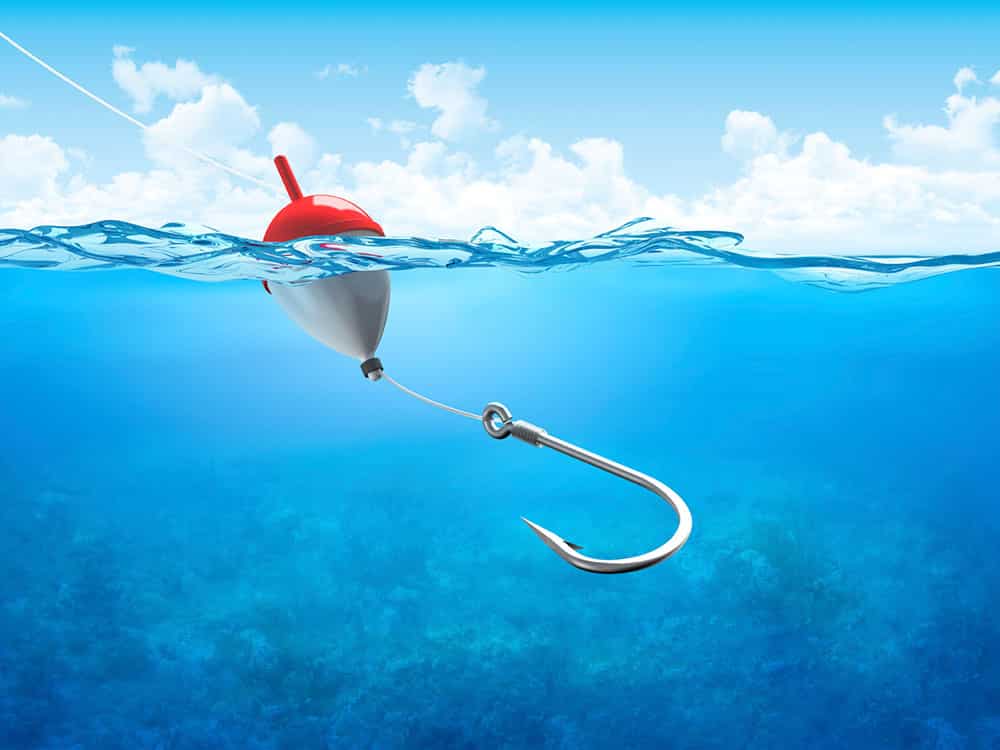 Hooks are available in a range of sizes and styles designed to catch anything from a minnow to a marlin. Hooks also come in many different colours. Despite the myriad of choice which is available, a few basic sizes and styles will most likely suit all your fresh- and saltwater fishing needs.

This article will discuss hook sizes as well as the most common hook styles and their uses.

How hard could it be to think of a system to describe fishing hook sizes in a logical manner? Perhaps a basic numerical measure, with 1 being the smallest size, up to 20 which would be the largest? Or maybe a sizing system, with XXXS to XXXL? (Although there are probably too many hook sizes to make that one work). You get the idea though; both you and I could think of a simple system to use, so surely there is a simple system in use? Unfortunately not. 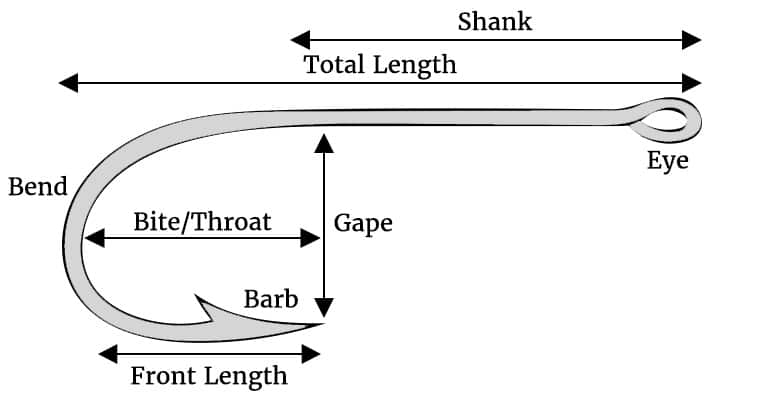 The size of the hook is based on the gap between the shank of the hook and its shaft (known as its gape) as well as the length of the shaft. It’s given as a number and the bigger the number, the smaller the size of the hook — up to a point. A #22 hook is miniscule and used for tying flies, whilst a #6 hook with a quarter-inch gap is perfect for catching bream. This size system is consistent until you reach a #1 hook. From here, the next size up is a 1/0, then 2/0 and so on, with a 2/0 being a suitable size for plastic worms being used to catch bass. The largest hook is a 10/0 which is big enough for a shark.

The shaft of the hook also has a somewhat standard length. A #6 hook will generally have a shaft about five-eighths to seven-eighths of an inch long. If the number of the hook is followed by another number and an x, it signifies that the shaft is either longer or shorter than normal. For instance, “#6 2x Short” denotes a #6 hook which has a shaft the length of a hook two sizes smaller. A #6 2x Long has a shaft which is the length of a hook two sizes bigger.

Generally, the biggest hook you would ever need when fishing in freshwater is a size 1, therefore some fishermen like to look at hooks which are size 1/0 and above as saltwater hooks only, which simplifies the system somewhat.

There is no benchmark for the different fishing hook sizes, which means that a #6 from one manufacturer can differ to a #6 from a different manufacturer, although it won’t be by a huge amount.

The size of the hook you should use depends on the size of the fish you are trying to catch, or more specifically, the size of its mouth. A five-pound carp and a five-pound bass are pretty much the same size, but you will need a much smaller hook if you want to catch the carp as it has a far smaller mouth. You also need to consider the size of the bait you’re using with the hook. Live minnows require a larger hook than earthworms, even if being used to catch the same species of fish, as the gap in the hook needs to be wide enough to allow the minnow to move. Just try to keep in mind that you can catch both big and small fish with a small hook, but only big fish with a big hook.

What about treble hooks?

Some hooks come as double- or triple-gang hooks, meaning that there are two or three hooks on a single shaft. These hooks have specific uses and can regularly be found in most tackle shops. Importantly, the sizes can differ on double- and triple-gang hooks compared to single hooks. For instance, a #6 treble hook can have a gap which differs compared to a #6 single hook. 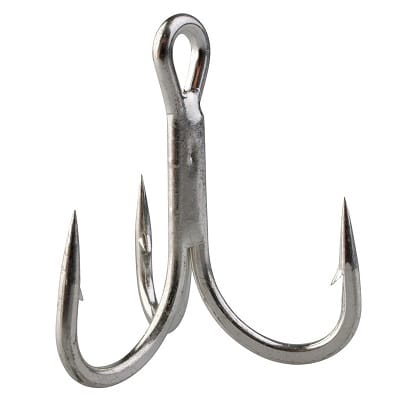 Hooks are designed for different kinds of fishing and so come in different shapes. There are some which have a very wide gap between the point and shaft, meaning they can be used with thick plastic worms and still have a small gap for the bait to fill when you set the hook on a fish. Others use barbs, distinctive bends, or even small coils of wire to ensure that the bait remains on them. You can find hooks made from very heavy metals or light wire, it all depends on the kind of fish they are designed to catch.

Below is a guide to the most popular fishing hooks:

Aberdeen hooks are made from light wire and are commonly used for bait fishing. The thin diameter means that the bait is hooked with no trouble and minimal damage, meaning it remains lively whilst on the hook and therefore works very well when freshwater fishing using live bait. If an Aberdeen hook gets snagged, by using a bit of pressure they can be bent and pulled free.

Bait hooks can be found in various different styles and are the most commonly used style of hook. The majority feature either barbs or a small spring attached to it, both help hold the bait in place. Shorter bait hooks are great for use in snells, whilst longer ones are good for teaching children how to fish. 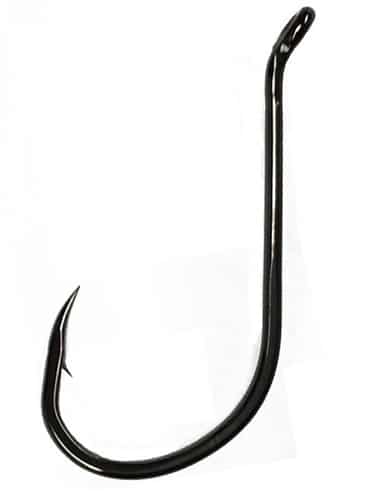 Circle hooks get their name from their circular appearance. Mainly used when fishing live baits, circle hooks increase hooking percentages and reduce the likelihood of gut hooking a fish. The main difference between a “regular” hook and a circle hook is displayed when a strike happens. Instead of requiring a hard set, like normal hooks, a circle hook slides out of the fish’s throat and the barb penetrates once the hook has reached the corner of the fish’s mouth. At this moment, the hook point rotates and the hook sets itself. If you try to set the hook in a manner consistent with “normal” hooks, it will almost always result in the fish being lost. Instead, crank down and apply steady pressure. 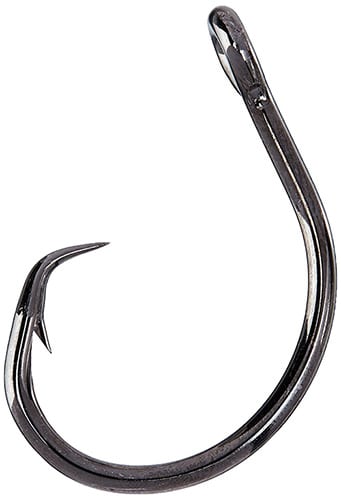 The most important aspect of a fishing hook is how sharp it is. Some will be exceptionally sharp when you purchase them, but others will require sharpening. A blunt hook will not function as intended, resulting in missed strikes and lost fish. Regardless of the size or style of hook you are using, ensure that it is sharp.

Egg hooks have a short shank and a wide gap, designed to be used with salmon eggs, dough balls, corn, and other prepared baits.

Octopus hooks have short, curved shanks, although not as severe as circle hooks. Octopus hooks are mostly used when bait fishing and when a low hook weight and size is desired. These hooks are ideal for hooking a leech through its sucker. This hook style has spawned a number of variations, with the mosquito hook being the most popular variant. 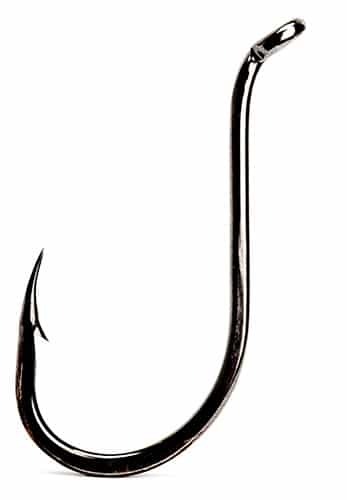 The shaft on these hooks are bent into an L shape and are mainly used to hold plastic worms on the hook.

Primarily used for saltwater fishing, an O’Shaugnessy hook has a strong round-bend and works best when fishing live baits.

Siwash hooks have a characteristically long shank with a straight eye, these two factors combine to ensure they sit correctly on lures. Siwash hooks are commonly used on single-hook baits, such as spinnerbaits but can also be a great alternative to the treble hooks which come as standard on spoons and other baits. Siwash hooks can also be a useful replacement to treble hooks when fishing hard-baits or when fishing in an area which limits the number of hook points per lure. 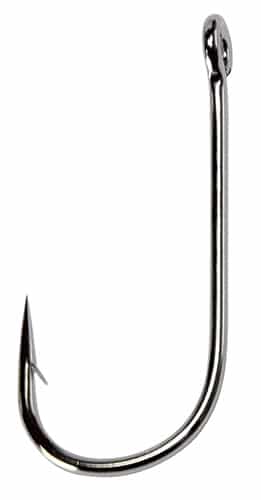 A weedless hook is prevented from hanging up in weeds or debris as it has a plastic weed guard which runs from the eye of the hook to its point. 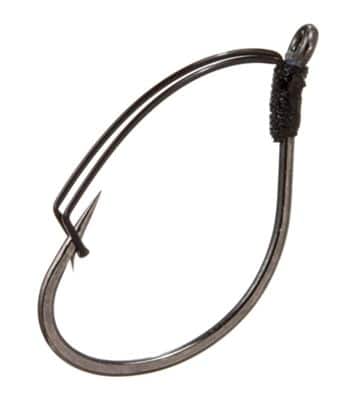 Many hooks are “barbed”, meaning a barb is present below the point of the hook, the barb prevents the hook from coming back out of the fish’s mouth. Some waters have rules which ban the use of barbed hooks, as they are more likely to damage the fish permanently. Should a fish break away with a barbed hook, it must wait for the hook to rust off, instead of it just dropping out eventually, as is the case with barbless hooks. It is possible to make a barbed hook barbless by pinching the barb flat using a pair of pliers.

The majority of hooks are made using a form of steel, ranging from pure iron to stainless steel. Saltwater hooks are normally made from a material that is rust resistant, whilst freshwater hooks don’t have this requirement. This is because freshwater rusts metal far slower than saltwater. There are specific alloys available which keep the hook sharp and others which give it enhanced strength, preventing it from bending when fighting a big fish.

Stainless steel hooks won’t rust in your tackle box, but this also means they will not rust in the fish either. If a fish is hooked deep in its throat, some fishermen will cut the line, leaving the hook lodged in the fish’s throat. This is a problem, particularly if the hook is stainless steel as it will not deteriorate quickly enough within the fish for it to survive. A disgorger is a great tool which will remove the hook from the fish quickly and easily.

A snelled hook is any type of hook with a leader tied to it in a certain way. Instead of the line being tied to the eye of the hook, as is the case with all other hooks, the line is tied to the shaft of the hook. Some snelled hooks don’t even have an eye, but a spade-shaped foot at the end of the shank. The line is wrapped around the shaft and tied so it pulls in a straight line.

Whilst this concept may seem strange, there are advantages that Snelled hooks have over regular hooks. The knot which connects the hook to the line is extremely strong as it makes contact with the hook multiple places, lowering the chance of a break. In addition, the way it’s attached puts a more direct pull on the hook, leading to a better hook set and increased control when fighting a fish. The opposite end of the leader is normally tied in a loop so it can be easily attached to your line with a loop knot or snap. 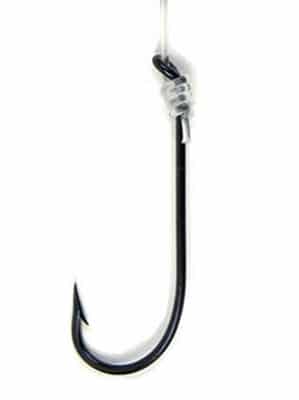 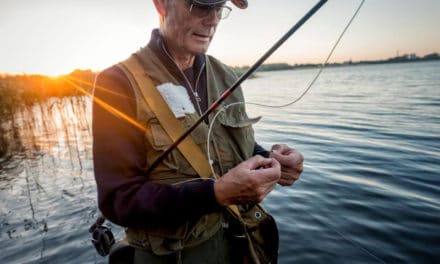 Which Line to Use? 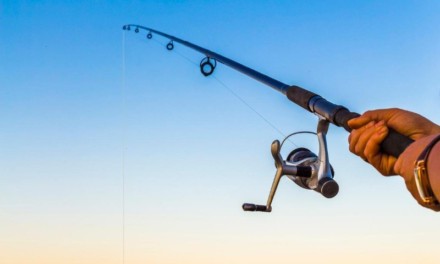 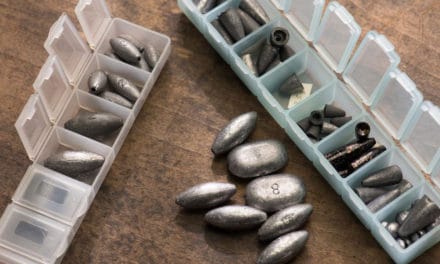 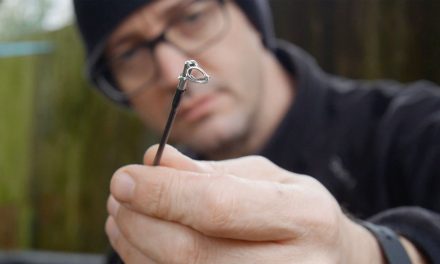