North America hosts a passionate obsession with its bass fish species and subspecies. From general recreation, huge payout tournaments, and cooking, bass have become a familiar sight across the continent’s fisheries.

Across North America, there are four main types of bass fish species:

Black bass are freshwater fish with elongated bodies and are well-known, hard-fighting fish. Colors vary between subspecies, and they all have spiny and soft rayed dorsal fins, most of which are joined together to form a single fin. While they are technically part of the sunfish family, they grow much larger than your typical sunfish, making them appealing to anglers.

Undoubtedly the most popular bass species, America’s obsession with black bass has created a multi-billion-dollar industry focused on entertainment and tournaments.

You can find black bass in all freshwater bodies across North America, from deep lakes to shallow streams. Almost every method of fishing can be used to catch black bass, from live bait to fly fishing and everything in between! 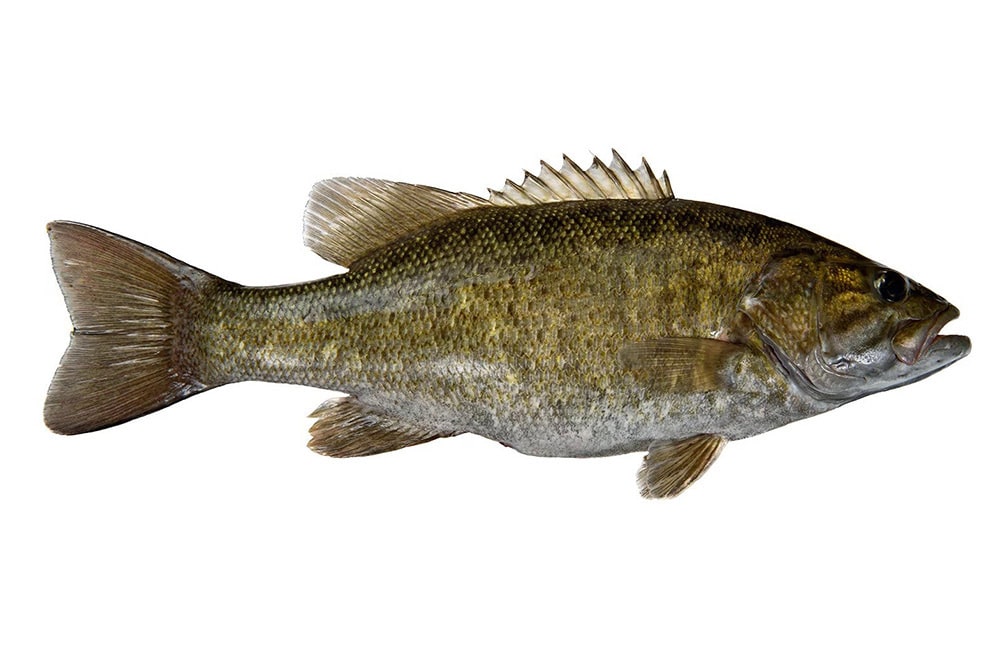 Often referred to as bronzebacks, these light brown-colored fish are one of the hardest-fighting subspecies on this list. Smallmouths caught in clear and cold freshwater have very defined colors, making their vertical lines evident. Adult smallmouths often present with red eyes and are distributed throughout North America. 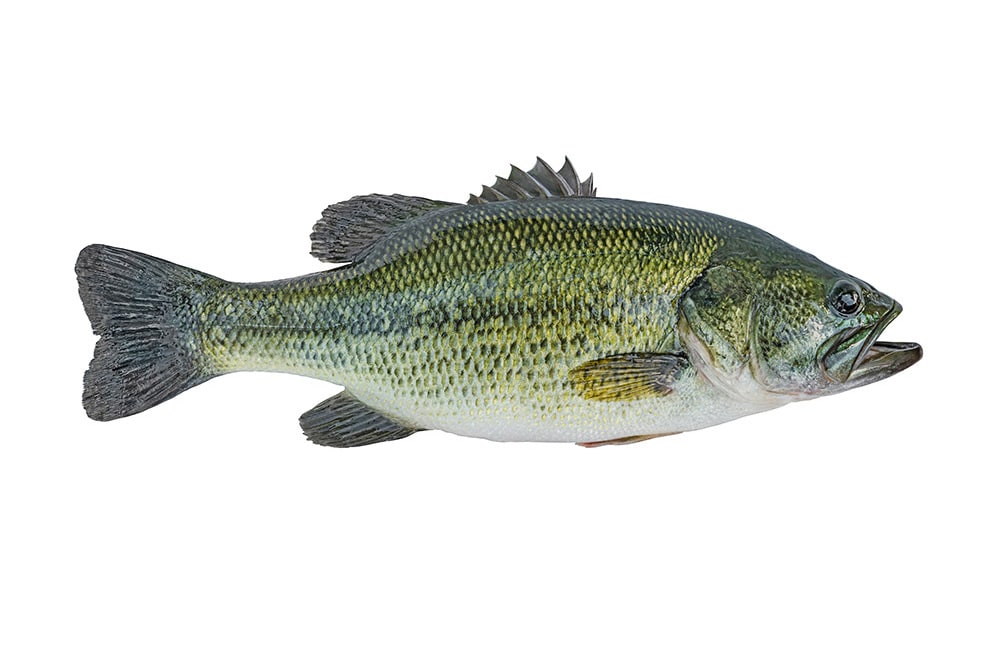 This is probably the most popular subspecies of black bass, and the one most people will have heard of. Their sheer size makes them one of North America’s most coveted fish species. The lures and tactics you can use to catch a largemouth bass are almost endless due to their diverse diet, made up of shad, crawfish, worms, and insects. 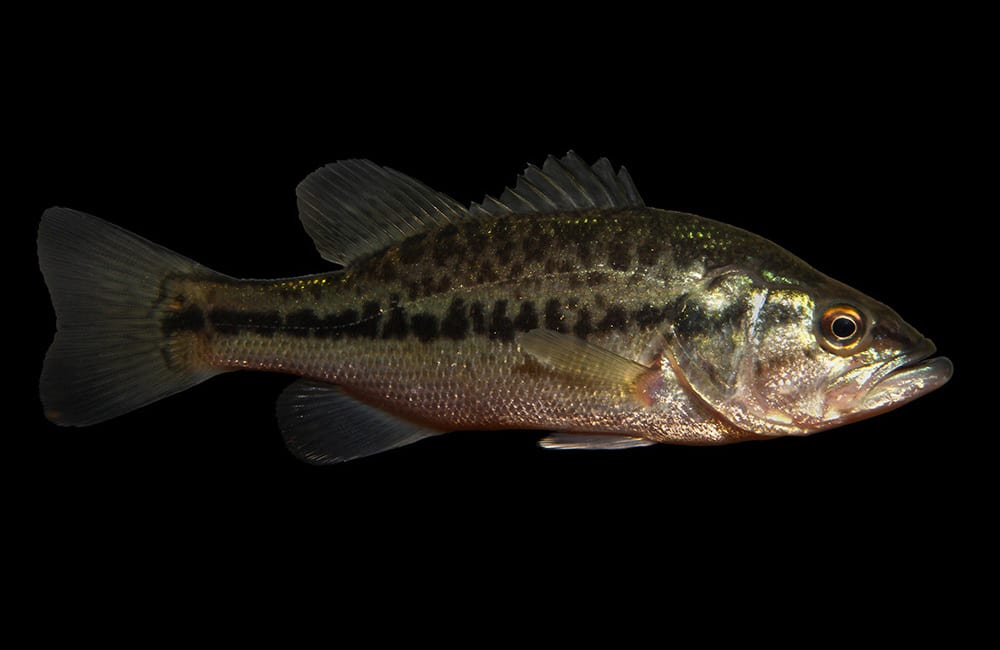 Spotted bass are often confused for their largemouth cousins. Two of the main differences that spotties have are dark spots along the lower half of their bodies and a connected dorsal fin. Spotted bass eat and behave much like largemouth bass, being similarly hard fighters (pound-for-pound) when on the end of the line. 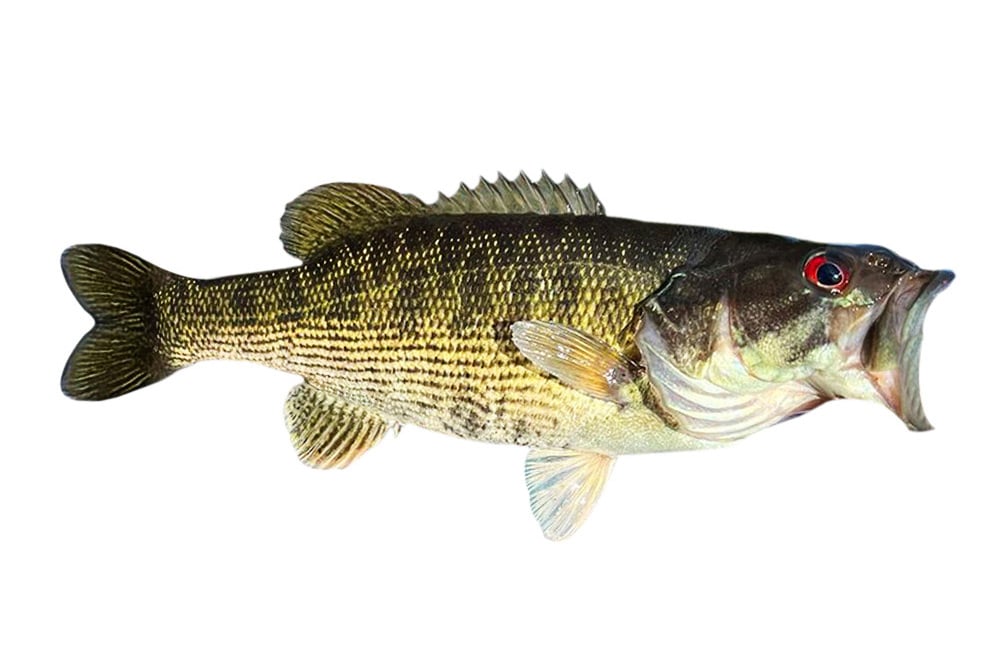 Redeye bass may be a new species to many lake fishermen, but creek anglers will be familiar with them. A small member of the black bass family, redeye bass have brown-green sides that are lighter in the center and decorated with vertical stripes. As you may expect, they get their name from their piercing red eyes. 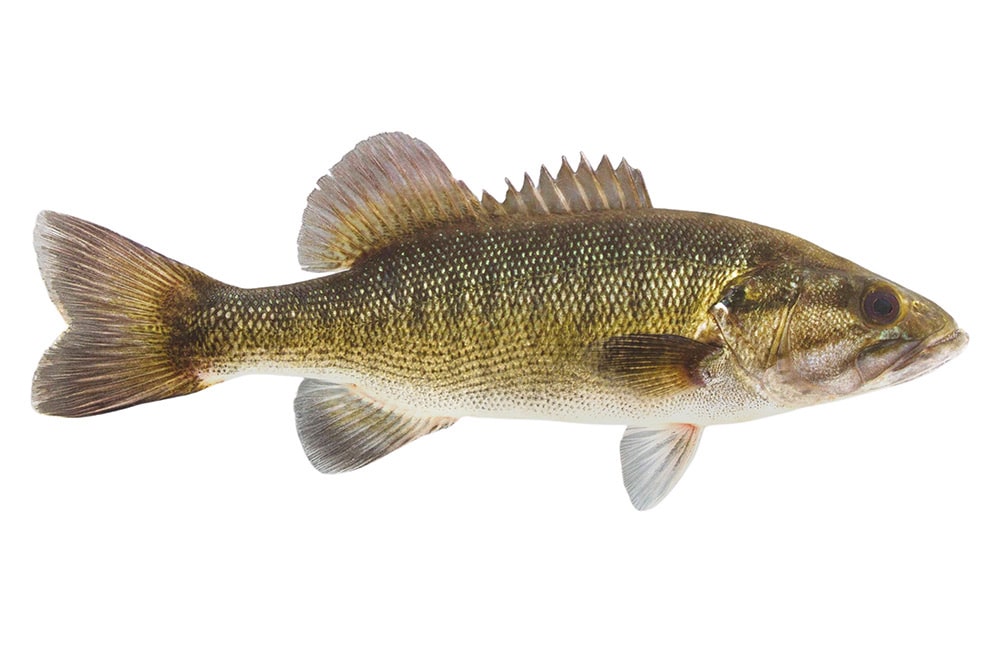 The shoal bass could be considered a new bass species. Until 1999, it wasn’t recognized as a stand-alone species and was considered a subspecies of the redeye bass. A native only to Georgia, Alabama, and Florida, this creek-based bass species can be caught using various tactics and baits; favorites amongst anglers include fly fishing and float fishing. 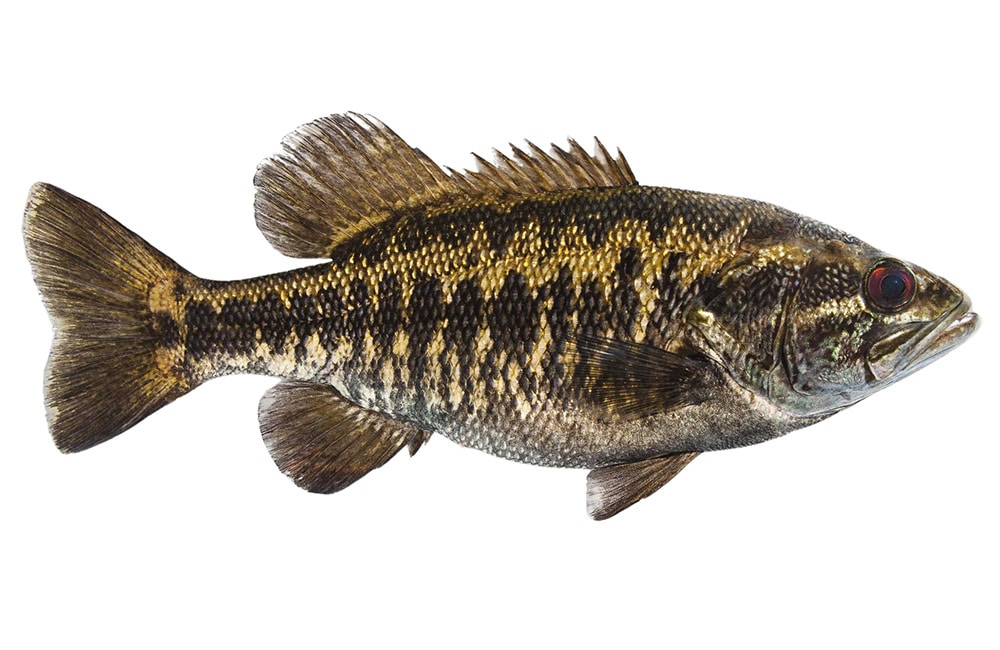 Allowing for their average weight, suwannee bass are shorter in length than many other bass species discussed here. Found only in southern Georgia and northern Floria, these stunning fish have brown bodies with olive mottling across their sides. Their face is decorated with prominent horizontal striped markings, a common feature across the black bass family.

The general coloration of temperate bass differs slightly from subspecies to subspecies. Members of the temperate bass family display stripes that run horizontally along their bodies and have pearl white undersides with light grey backs. Compared to other bass species, temperate bass have smaller mouths, thin lips, and large, rigid scales.

While temperate bass are widely distributed through North America’s freshwater lakes and rivers, they can also be caught in brackish water. Some species are actually anadromous, meaning they spend most of their life in brackish or saltwater and only enter freshwater to spawn.

Their diet is typically made up of shad and other baitfish, along with small crustaceans and insects. Temperate bass are known to form large schools, making them a popular option among anglers; being in the right place at the right time can lead to a highly productive day, plus they put up genuinely swashbuckling fights.

Watch out when handling these fish. Temperate bass carry sharp, spiny dorsal fins that were once used as a defense mechanism and are also equipped with razor-sharp gill plates. 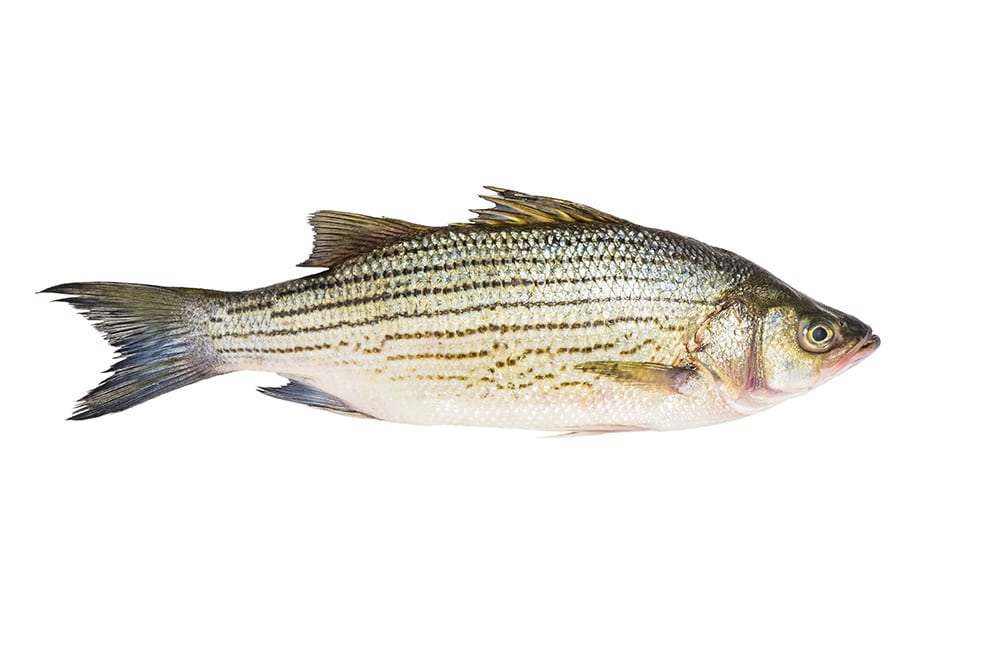 A highly desired bass species, striped bass display seven to nine prominent horizontal stripes that run from head to tail. Striped bass can reach enormous sizes, with individuals over 50 pounds not being unheard of.

Stripers migrate between saltwater and freshwater, meaning they have one of the largest ranges of any bass species. From the Gulf of Saint Lawrence to the Colorado River, ripping a large swimbait through the water is a highly effective striped bass tactic. 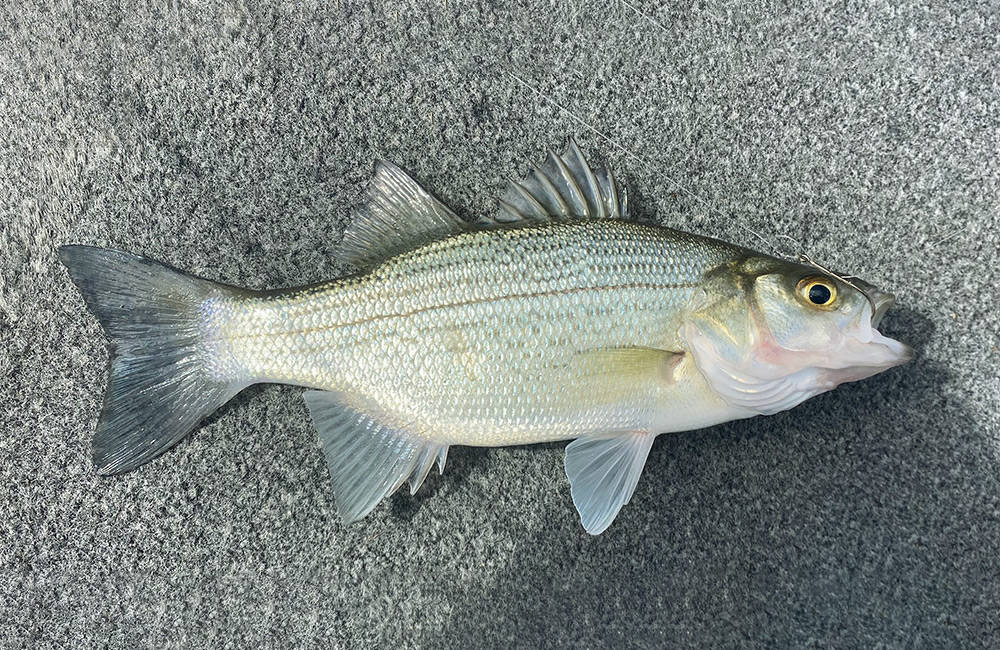 White bass are freshwater fish distributed across North America; they can be caught anywhere from small, running streams to large, stagnant lakes. Catching a white bass can be as simple as throwing a white grub (or any bright color) and working it quickly through the middle of the water column.

Often mistaken for striped bass, white bass usually come in between 12-15 inches in length and so are considerably smaller than their bigger striped bass brothers. 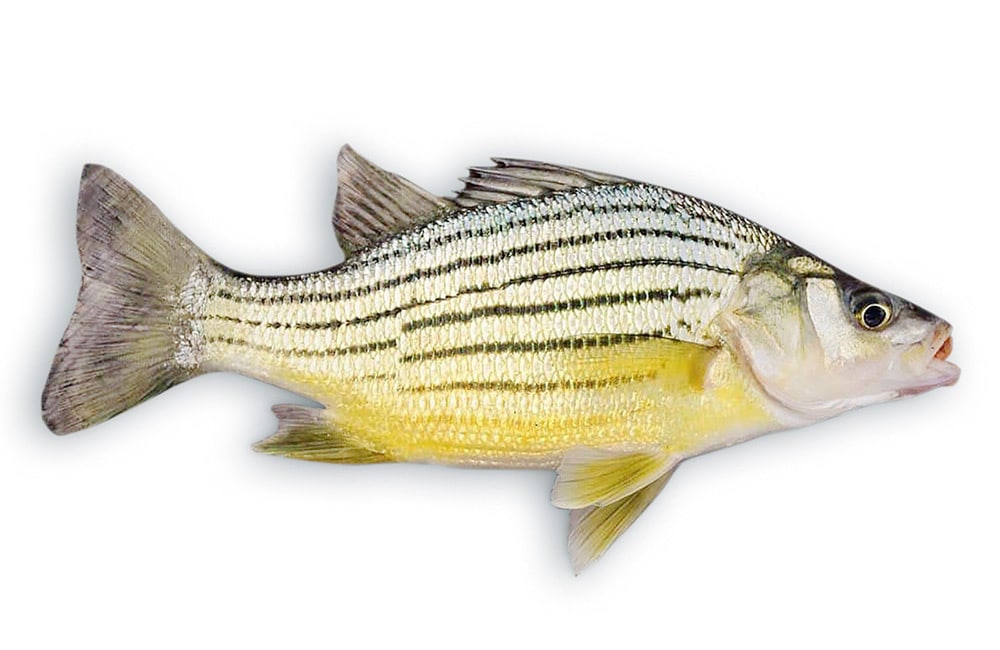 The yellow bass is a small fish, probably closer in size to perch than most of the bass species on this list. Typically caught from clear rivers, yellow bass display defined horizontal lines from head to tail, similar to striped and white bass. If the conditions suit, a grub, rooster tail, or any small spinner can land you multiple yellow bass in a single session.

Many species of ocean-dwelling bass are closely related to their freshwater counterparts. While the ocean hosts many different subspecies, three of note are: spotted sand bass, calico bass, and barred sand bass. 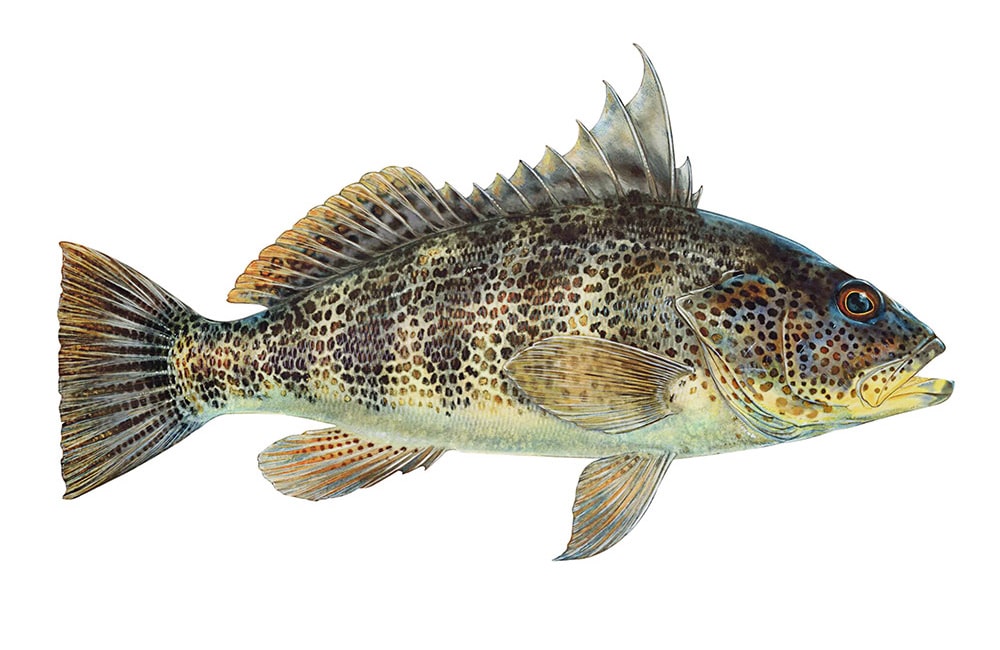 As you would expect, spotted sand bass boast a stunning pattern made from hundreds of black and brown spots displayed on their bodies. They also have a distinctive dorsal fin, where the third spine is considerably longer than the preceding and proceeding spines.

Usually between 12-16 inches in length and 3-4 lb in weight, these beautiful fish are distributed in the central-eastern range of the Pacific Ocean. As an ambush predator, spotted sand bass feed on smaller baitfish such as herring. Using a natural colored grub or live bait can land you a PB spotted bass. 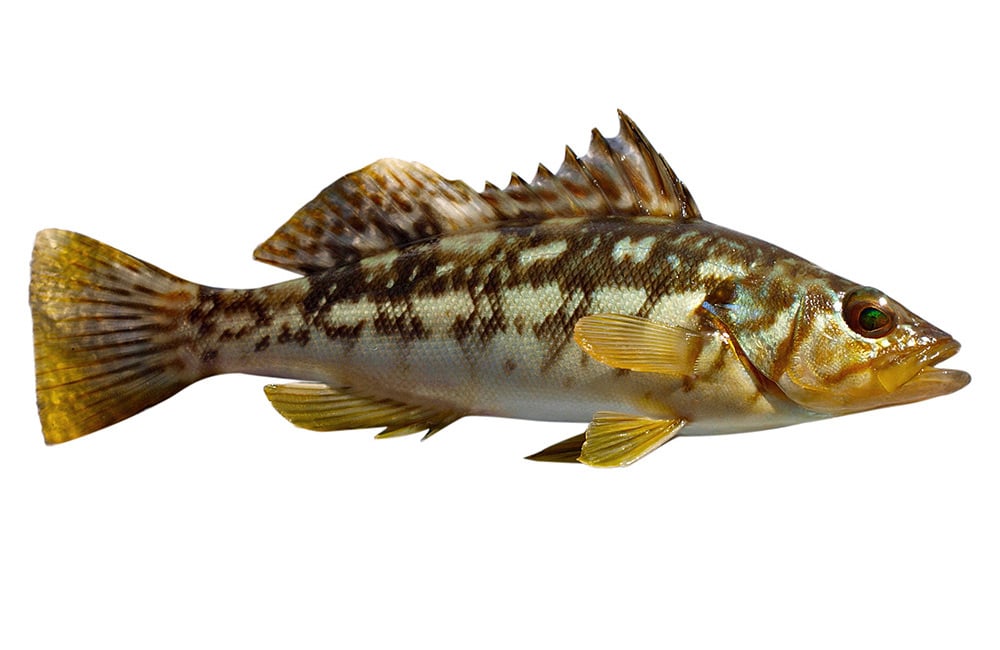 Undoubtedly, the calico bass is one of the most unique-looking bass species, with varying shades of brown, black, gold, olive, and white decorating their bodies.

Also known as kelp bass, calico bass congregate around underwater kelp forests, using the vegetation for cover as they ambush prey feeding on zooplankton. A highly desired species by anglers, calico bass also make for excellent table fare and are a staple in many Mexican cities. 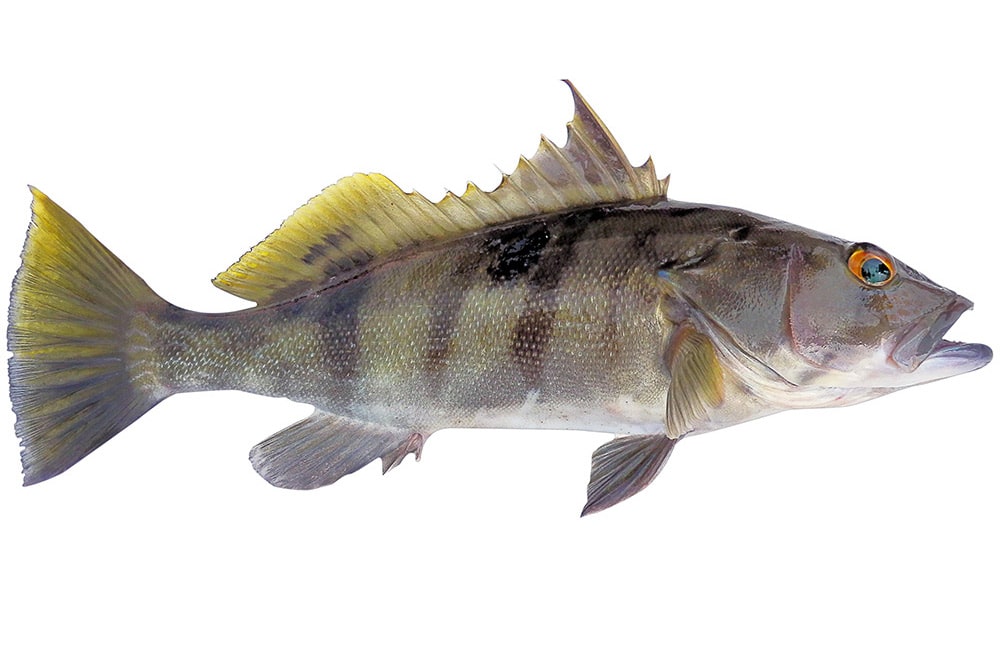 The barred sand bass is found off the southern coast of California and northern Mexico. While not huge, this species puts up one hell of a fight, providing decent battles to anglers using light tackle.

Similarly to spotted sand bass, their third dorsal spine is also significantly elongated. As the two species share a similar distribution and diet, you’ll need to look for other distinctive characteristics to separate the two. One of which is the clearly defined, dark vertical bars running down the sides of this species.

North America is also home to other species that are popular amongst anglers. We’ve grouped fish that are non-native or hybrids of native species in this category. While these fish offer excellent recreational opportunities, it is essential that these bass populations do not grow to a point where they negatively affect domestic bass species. 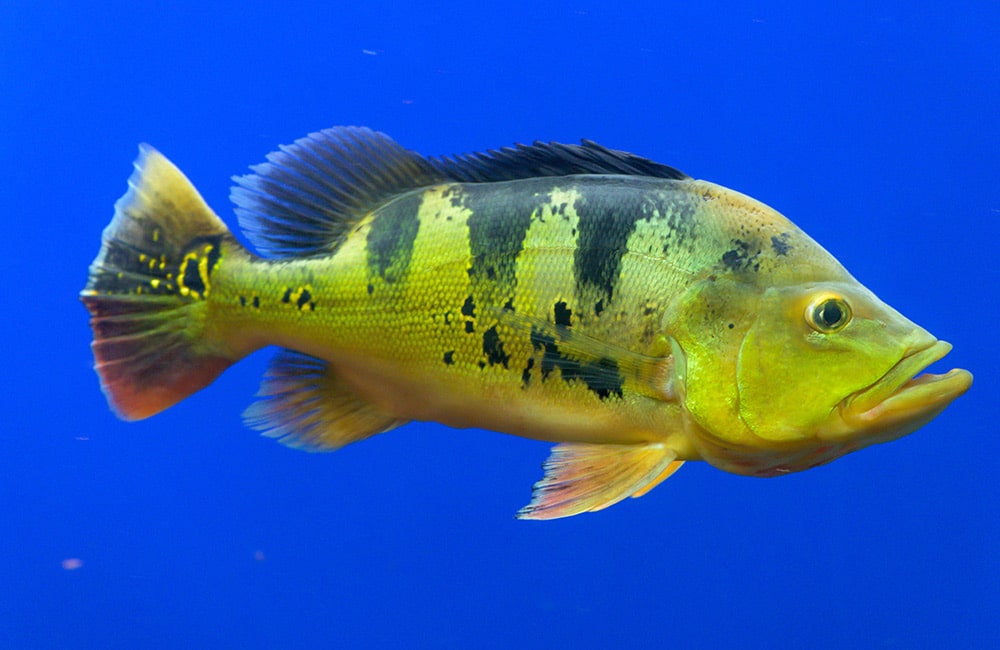 Strictly speaking, peacock bass are not technically bass, although anglers still treat them as such. Peacock bass were introduced to south Florida from South America in the 1980s to keep invasive species in check, and so are recognized as non-native to North America.

These fish are known for their explosive bite and the intense fights that ensue. As popular as peacock bass are, you will have to concentrate your focus on south Florida if you plan to fish for them. 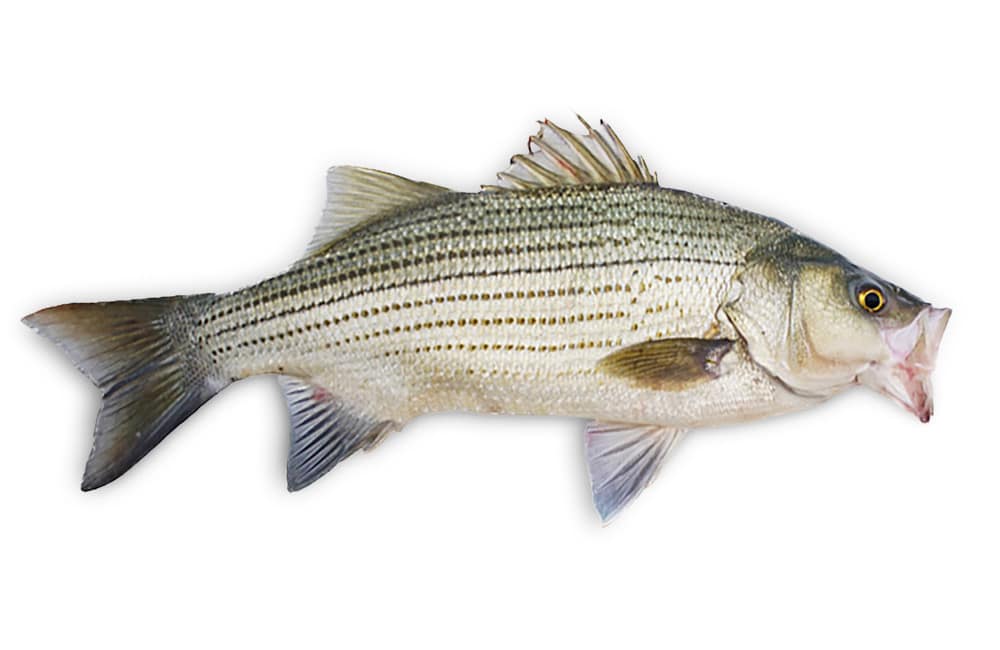 In recent years, hybrid bass have changed the bass fishing game. Hybridization can occur between largemouth and smallmouth bass or, more commonly, between striped and white bass. Here we look at the striped/white hybrid.

Luckily, hybridizing fish does not affect an ecosystem as much as it does with other animals. Targeting a hybrid fish can be a great way to expand your fishing knowledge and catch fish that others rarely target.

There is no simple answer when people ask the question, ‘what is a bass fish?’ and identifying them can be challenging. This guide and the subsequent pages are designed to make identifying and catching specific bass species easier.

After catching a few different subspecies, you will undoubtedly be hooked, like much of North America. Bass fishing is a diverse, engaging sport and shouldn’t be limited to a single species, so get out there and catch as many different types of bass as possible!