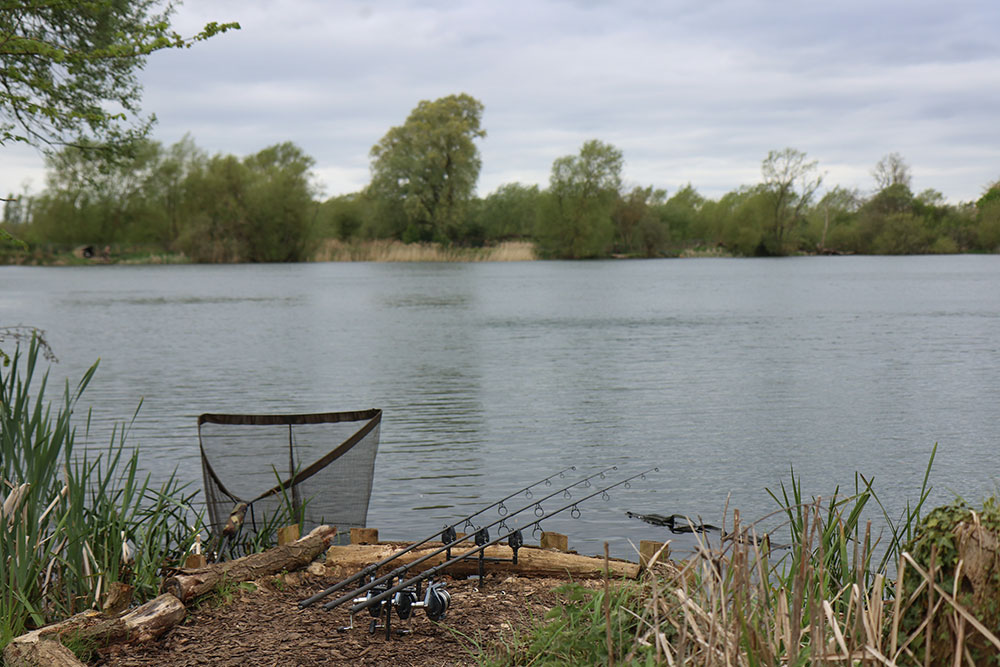 In this article series I’ll be taking a look back at the legendary water that is Stanton. We’ll look at the highlights, the lowlights and everything in between. If you need a refresher on this incredible water, click the button below to take another look at the map with important swims highlighted: 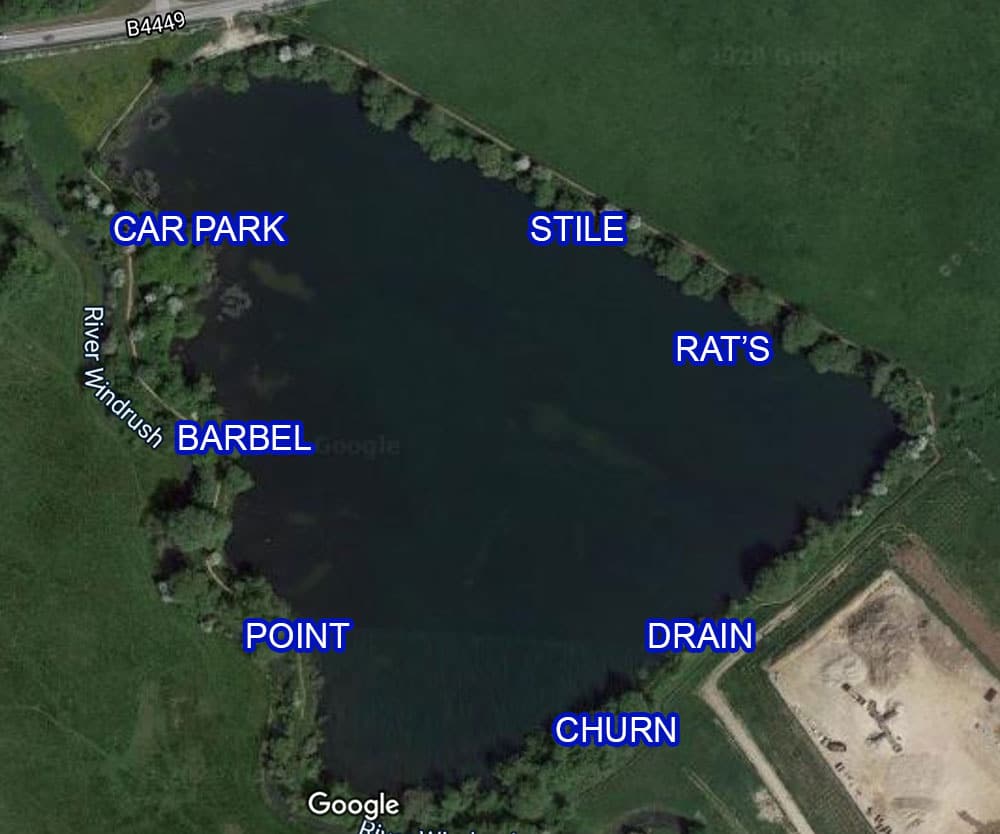 I arrived early and woke Pete for a coffee, we watched the lake from his plot in the Barbel and as the odd fish showed, we could see a few close in to the meadow bank to the left of the Drain. Obviously I was keen to go back in there but wanted to see what the fish were up to. We wandered around and watched closely, trying to pinpoint them from the meadow bank.

They were very close, about 15 yards out between the Drain and Churn, another member arrived as we stood watching them fizz and roll at the base of the shelf. ‘Seen much?’ he asked wandering into the swim, now the rule is a draw at 10am and I would be pushing it to say it was even 8 at this point but it was a golden opportunity and I wasn’t going to let it slip by, besides, I had found them. “sorry guys but I’m going to get a rod” and I legged it back to the car.

10 minutes later, I was rod in hand waiting for a show to cast at from the drain. Soon after I had three Ronnies on long helicopters cast at shows amongst the weed and silt along the base of the marginal shelf to the left of the swim. A short while later the left was away with a powerful take, we had been seeing good fish so it was no surprise when a nice mirror appeared for the net.

Unfortunately, it was a repeat in the shape of Arms length again, slightly up at 29lbs. I retained her while Pete fetched his kit as he was moving round to have a social and re-positioned the rod in the same zone farthest up to the left of the swim. As Pete was sorting his rods out the same rod was away again, this fish really scrapped, the rod lurched round in the rests as it took off on a slow but powerful run. After what seemed like ages a big grey common came up for the net, she weighed 27+ and looked awesome with her fins bristling in the morning sun. 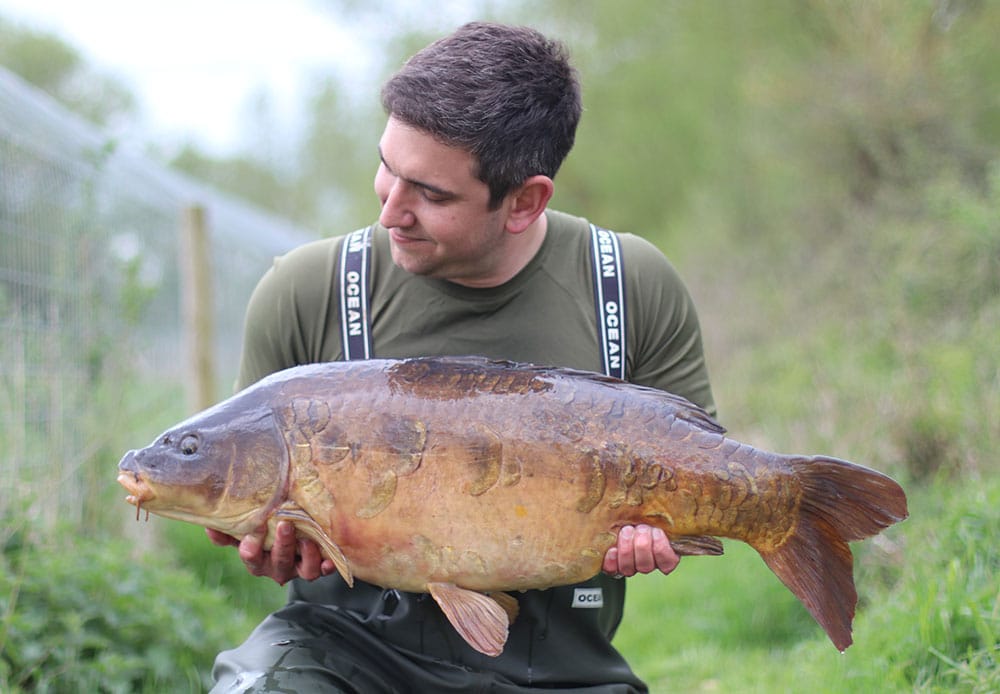 Arms length a little up at 29 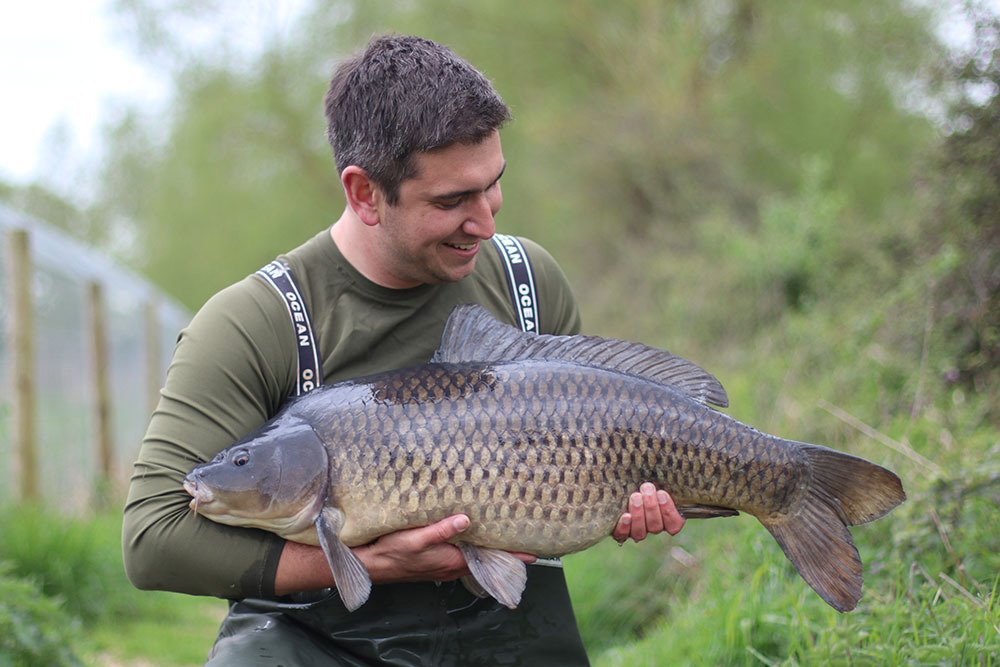 After we returned the fish, the shows subsided and the wind increased, blowing a huge westerly diagonally left to right across my swim and making accuracy at range a challenge. I had positioned the rods on the usual spots, but in truth I was not completely happy with how the ‘hot’ rod was sitting, which should be on the centre of the clay. During a lull in the wind late that afternoon I decided to re-cast it, punching it straight back on the money first time.

Allowing some correction for the bow, I was confident the 5oz lead had landed right, sunk and straightened the line before setting the bobbin. As if to prove the point that it had been wrong the first time, that same rod was screaming before I made it back to the brolly This was another decent fish, angry at its mistake. It kited right, staying deep as the lead hadn’t discharged and eventually wiping out Pete’s rods. Sorry mate. After a bit of untangling we slipped the net under another nice 26lb common.

The rod was re-positioned but nothing further happened through the night. I awoke in the morning and was greeted by savage weather; there wasn’t much action other than an occurrence which I think was probably a missed fish as the line pulled from the clip but never moved any further. I had to leave at midday but was more than happy with my three fish in 24 hours. 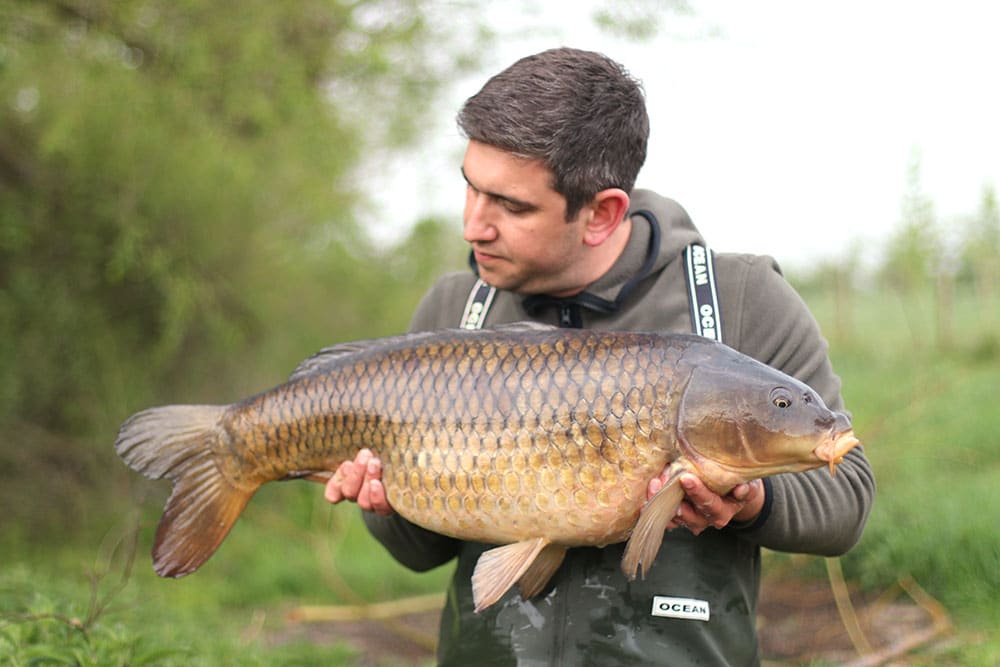 Third fish in 24 hours, and the spot did another bite the next day so they were still using it!

After that, angling took a back seat for a little while, my wife travelled to Germany again in late May giving me some time but the fish spawned early on Stanton. I had a long session in Reading, heading back to Oxford for the last couple of days of the trip. I arrived on 31st of May for the Friday morning draw, there was no need to rush as it was only me and one other member on the venue. He fancied the car park giving me the drain. Things had changed a bit in my absence. A thick band of Potumegtum was now growing along the bottom half of the bridal way bank, serving as a haven for the fish and they were evident. I was headed for the drain but never made it passed the Rat’s nest (remember the first swim I had caught from almost 20 years earlier?).

The left rod was away

The wind was pumping in West SW across the lake and the potum was on the surface from 20-40 yards out to the left and right, with fish showing in and around it. I found a couple of very small hard areas around the weed and baited lightly with the same mix as I had used previously, baits were still the little yellow Oxford Carp Baits PBs which had proved deadly so far. After an hour the left rod was away, this fish found the weed before I even picked up the rod and was lost to a hook pull, annoying but it was that or the boat and I fancied the area for more bites.

I stayed up late with Sam that night chatting about the spring and what was to come, and it looked really good. At 5am the right rod was away, it was locked up and the take pulled the reel into the alarm. As I played the fish in I became aware of thrashing around me, still waking up I realised they were spawning in the weed. I netted the fish, a lovely common, and wound the other rod in, it would be an early home time. Sam got some lovely shots despite being a little delicate himself and we packed up to leave them to it. This was the first fish of the 2019/20 ticket and a great way to start! 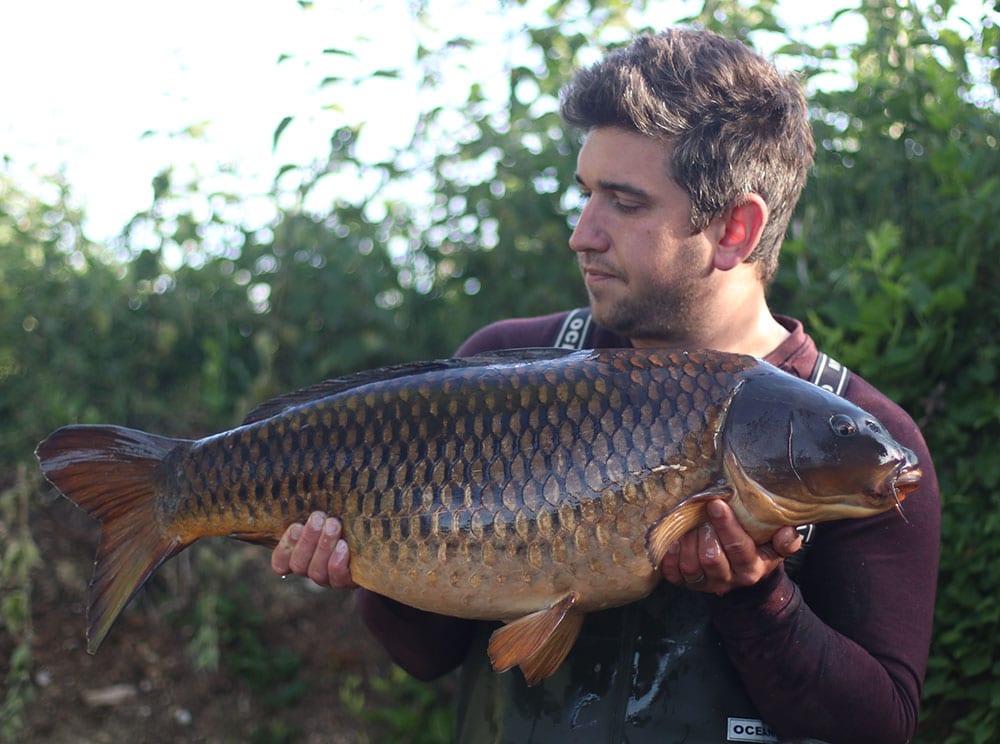 Amazing purples and bronzes, a great way to start the new season.

The first week of June I was in Italy for work, returning on the Thursday and heading straight to Oxford. The spawning had been short lived and they were feeding again, with the Drain having produced a new 30+ common in my absence to Pete. I headed straight there, hoping the area was well established and they would come. I should say this sounds like lazy angling and it’s not really my style but I had already determined due to its stock and size the best approach was to aim for a central area. I figured that the fish would pass during the weekend, there were times when one side of the lake is better than another but in general this rule was working for me.

Rods were fished in the usual zones, it was quiet with only a couple of other anglers on, the fish were very evident in the barbel and I was questioning my swim choice as the angler in there proceeded to lose a couple of fish that afternoon. I need not have worried though as around midnight the long rod was away and I landed one of my best fish from the pit. Not the biggest but a stunning fully scaled number called April, a rare visitor to the bank and in fact one I had never heard of when I landed her. One of the other members, James, got great some night shots and we slipped her back. 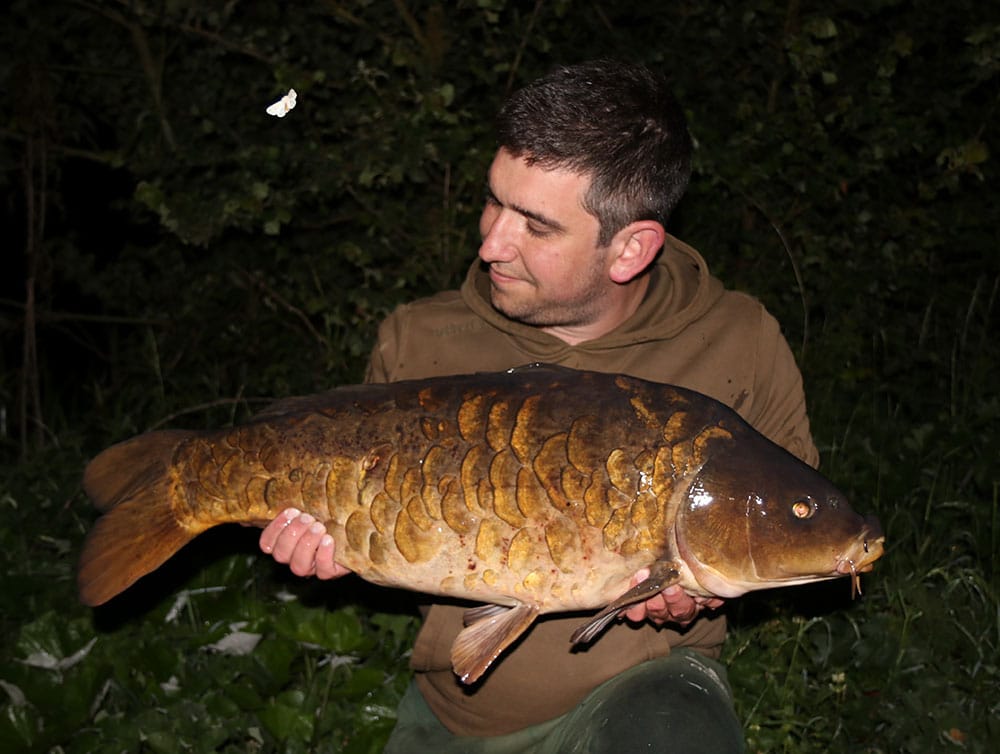 One of the best

The rest of the night was quiet as was the morning, conditions looked good, westerly and cloudy. I was sitting with another member when the long rod was away again, a good take which weeded me quickly. This was a fairly common occurance, but I could usually free them with a little patience however this one would not pass a certain point so the boat was called for. John, a weekday bailiff was quick to respond which was much appreciate and we soon had a lovely dark mid 20 common in the net. She looked awesome in the afternoon sun as the cameras clicked away; it was turning in to another lovely weekend.

The night was quiet and I thought the action might have passed but the next morning the middle rod was away again, this fish hit the surface immediately moving a lot of water. I was sure it was a better one, I was due one, so I played it very carefully. After a good fight a long common came up for the net, she went in first time. Peering in to the net, I was greeted with a common of almost 4’ but unfortunately very little girth. On the mat we recognised her as the 35 Pete had caught only a few weeks before, now spawned out at 27lbs. A very unique fish and the largest common in the lake so a great result. I decided not to re-cast as I had to collect my wife from Heathrow that afternoon. An hour before it was time to depart, the other long rod was away and I landed an odd looking mid twenty common, a lovely way to end a very successful spring on the pit. 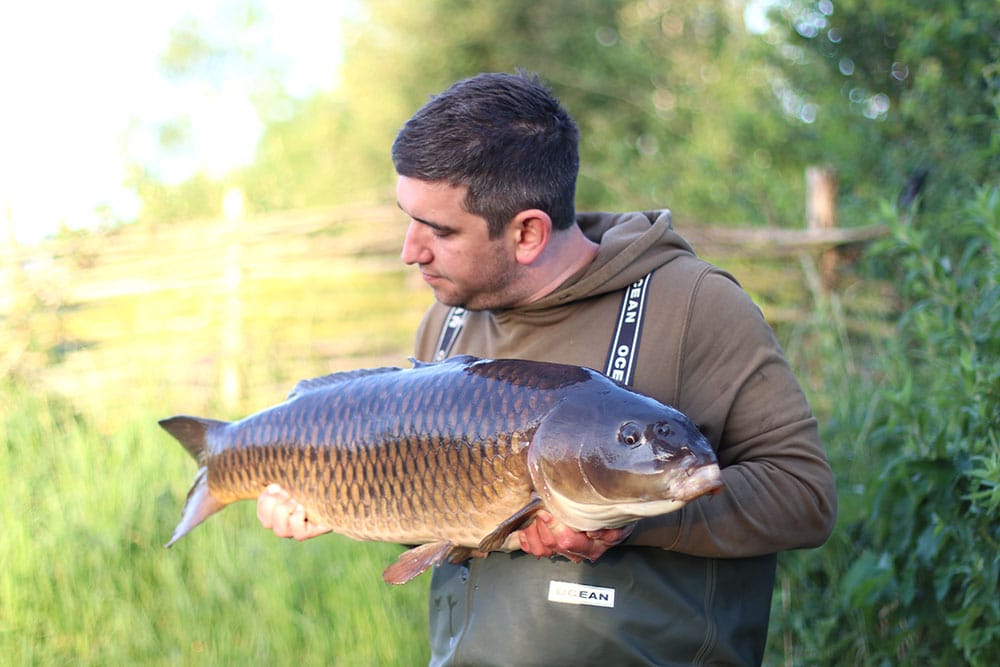 The largest common in the lake just a few weeks earlier 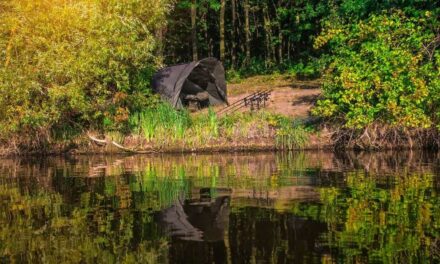 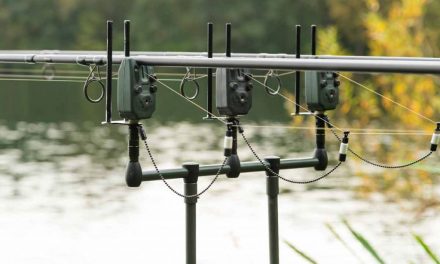 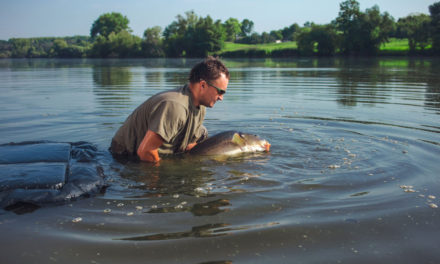 What Does It Mean to Be Good at Carp Fishing? 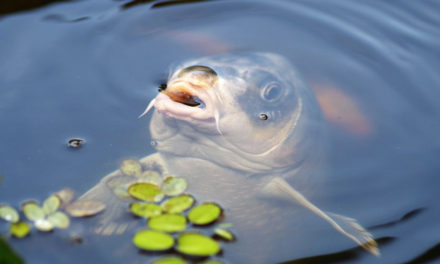