Designed by nature for one specific purpose – to kill. From a very young age pike kill other fish and, indeed, each other. As they mature, so does their taste for blood. An adult pike will readily attack another double its size without considering the consequences and big pike are known to feed on voles, mice, frogs, ducklings and moorhens.

Pike caught in the UK usually weigh between 5-11lbs, and have an average length of 22-35 inches (55-85 cm). However, they live for many years and continue to grow throughout their lives, specimens of 35 lbs plus are caught each year.

Despite these huge sizes being a possibility, a pike above 5 lbs will provide a fantastic fight and make an excellent catch for most beginner and intermediate anglers.

The pike possesses an enormous mouth with crocodile-like jaws. If this wasn’t enough, inside are lots of inward pointing razor-sharp teeth, even the tongue is armed with them. It has an elongated, torpedo-shaped body which provides incredible strength and speed over short distances. The force of its tail and tail fin afford the pike lightning acceleration and turning ability.

As a predator, hunting is key to the pike’s survival, as such it has a number of sensory sources to improve its hunting ability. Its large eyes are positioned in the front of its head and a groove runs along the snout to act like a rifle’s scope, providing pin point precision when striking its prey. In addition, sensory pores are situated across its snout and lower jaw to pick up scents and vibrations so as to track and hunt mottled fish in the water.

When spinning for pike, a range of artificial baits and lures can be used effectively, such as spoons, minnows and plugs.

Alternatively, small live-baits, between 10-20cm in length can also be used, with roach, dace, perch, gudgeon and rudd all being suitable. You can also use dead-bait, with bleak, gudgeon and perhaps surprisingly, whitebait, being ideal to catch pike with.

Pike spawn earlier in the year than most fish, generally between February and April, once water temperatures reach 6-12°C. The females visit shallow waters to spawn and often return to their preferred sites every season, accompanied by 2-4 smaller males known as ‘Jacks’.

Because pike spawn a month or so before other fish, juvenile pike have a head start on other coarse fish and so feed on small fry of other species. As such, young pike are often in good condition with a high level of fitness as there are so many easy meals freely available.

Healthy females produce vast amounts of eggs, with large specimens being able to produce over 500,000 eggs. These eggs take between 5-26 days to hatch, the larvae survive on the yolk sac for up to 12 days, as their body grows and their organs start to develop. The chance of larvae surviving to adulthood is just 0.1%, despite having a hatch rate of around 50%. Juvenile pike start to feed on other fish larvae/fry and tadpoles once they reach 5cm in length and cannibalism is also very common, teaching these young fish the importance of hiding in weed beds.

Pike are known for their gigantic appetite and will feed almost all year round, although during the winter they become less active and enter a somewhat dormant state.

If you are serious about catching pike, you need to be out by the water in either the early morning or late in the evening, as the fish are actively hunting for food at these times. The pike is both an idle fish which lays hidden, waiting to pounce on easy targets such as a passing sick fish, and an aggressive monster which attacks shoals of small fish.

Pike exist in all types of water in the UK. Lakes, streams, ponds, rivers, gravel pits and reservoirs can all hold surprisingly large pike. The main requirement for big pike is a healthy supply of shoal fish for the pike to feed on. 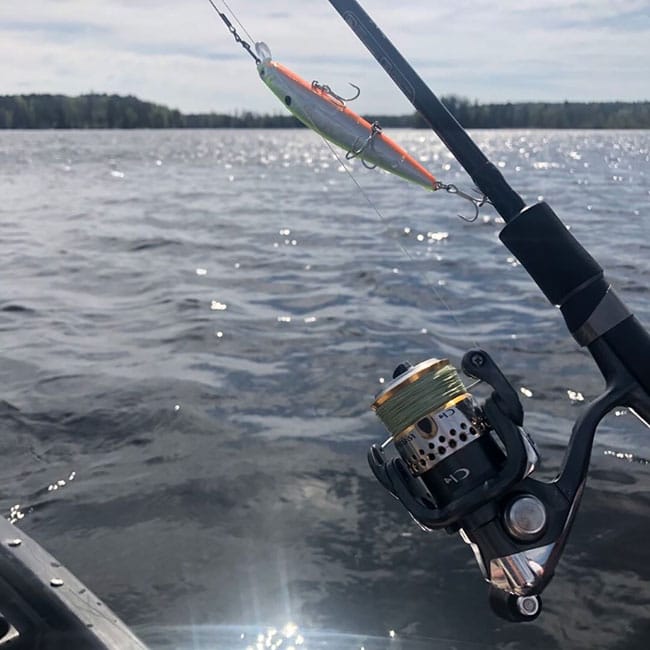 There are two main ways to catch pike – spinning and live-baiting.

Spinning is considered the more sporting approach of the two and a range of artificial baits and lures can be used effectively.

Whilst spinning is most definitely an art, the basics of casting and retrieving the lure can be picked up by a beginner after half an hour or so, if fishing with a more experienced friend. The recovery of the line is key as the lure below the water will react to the actions of the angler on the bank. On a mild day in clear water, spin the lure close to the surface, if fishing in very cold weather or when the water is particularly coloured, spin the lure nearer the bottom. Pike can see much further in clearer waters, allowing you to fish much higher, this is not the case in coloured water, the lure is harder to see and so needs to be positioned closer to where the pike are lying.

Keep the hook points sharp as pike have very bony mouths which are a challenge to penetrate. When hooked on light tackle, pike provide tremendous fights. Don’t try and haul the fish into the net or gaff too quickly as the line will likely break.

Because pike typically weigh between 5-6 lbs, very heavy tackle is not a requirement, moreover, hooking and landing a large pike using only fine tackle is both more rewarding and the sign of a more skilful angler. 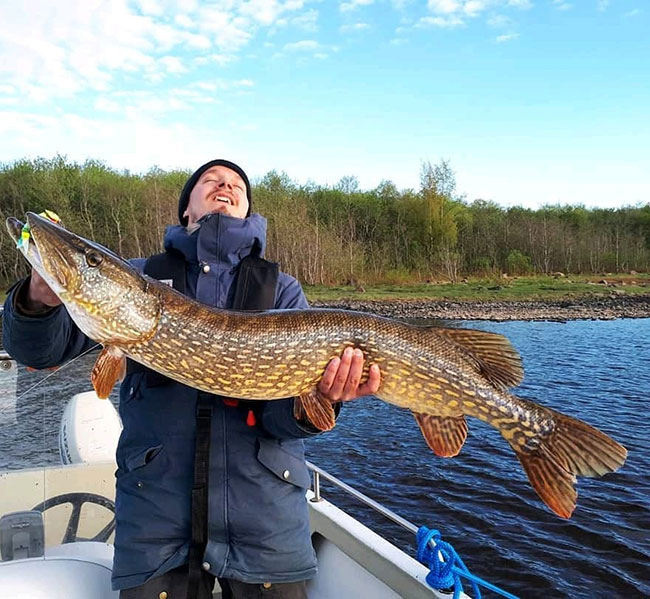 In the past, it was accepted that big pike were only taken on live-baits and that spinning tackle would yield more bites, but the fish would be smaller. With present-day light tackle, however, this is no longer the case, and big fish are now falling to spinning lures.

Paternoster tackle is great for weedy water before the weeds have died away. The live-bait is prevented from hiding amongst the weeds which gives the angler a huge advantage in the right waters. As when spinning, live-baiting does not require heavy tackle or casting long distances, as pike are often lurking not far from the bank. Again, the angler should rely on his ability to play the fish rather than the strength of the tackle. Beginners should not be disheartened if a fish is lost and instead look at it as a lesson learnt and what not to do next time.

If fishing a lake for pike, position the bait close to a weed bed or close to trees which line the bank, pike are known to hide around these areas waiting for their prey. Be careful though, as a hooked pike will likely dart towards the weed bed, where it may be lost.

An alternative method for catching pike is to fish a dead bait on the bottom of ledger tackle. This technique can yield very large fish and herring makes for an excellent bait, proving that pike are not put off by the taste of the sea.

The sink-and-draw method also utilises dead fish as bait, this technique involves putting a fish on tackle which holds a weighted spike. This is then pushed down the mouth of the fish with the hooks along its side. When put into the water, it will dive head first towards the bottom and is then pulled back towards the top, this closely resembles the motions of an injured fish, drawing the attention of pike. Bleak, gudgeon and perhaps surprisingly, whitebait, are perfect for this.

Regardless of if fishing live or dead-bait, groundbaiting is strongly recommended as it will attract fish into the area and hide the hookbait. In still water, use it as a cloud and don’t use too much.

Don’t forget to include a wire trace between the end of the reel line and the bait/lure, as pike can easily cut through nylon, whatever the strength.

It is not uncommon for pike to go for a coarse fish as it is in the process of being played or landed, so you could find yourself fighting one when out fishing for something else. The way the pike’s teeth are arranged means that once it has locked into a target, it is very difficult for it to be released. Fishing for minnows and finding yourself with a double figure pike on the line is not impossible! 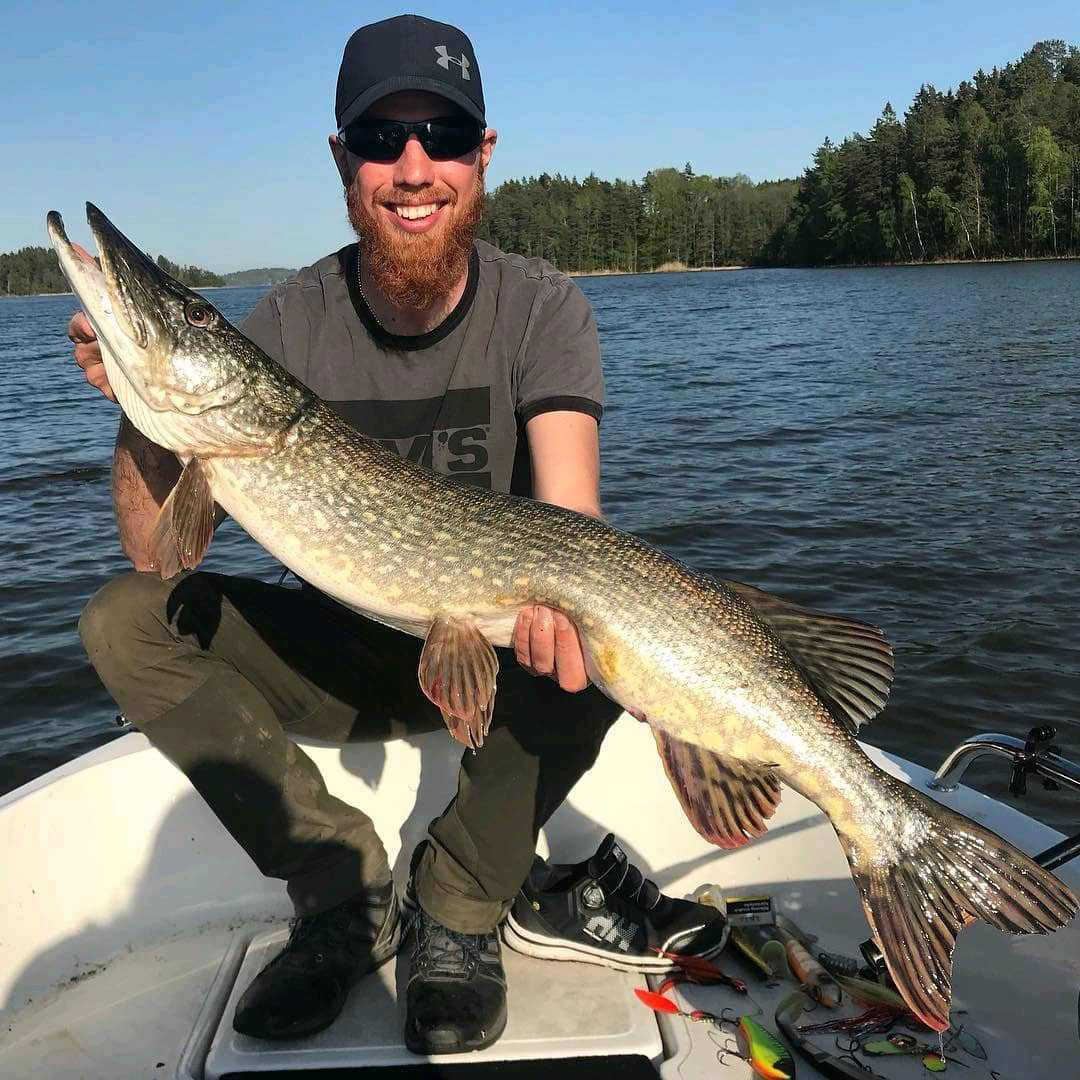 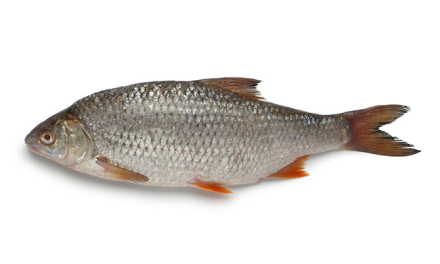 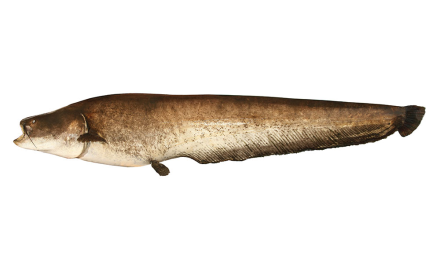 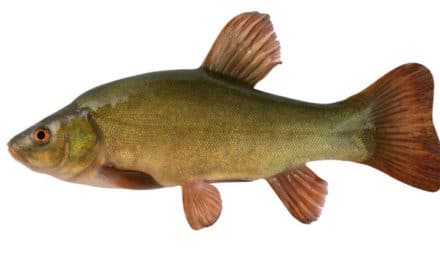 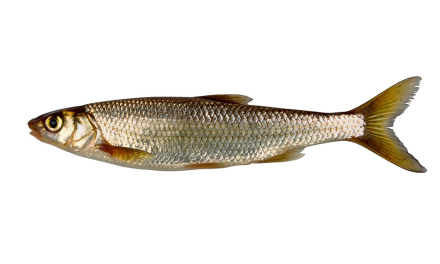